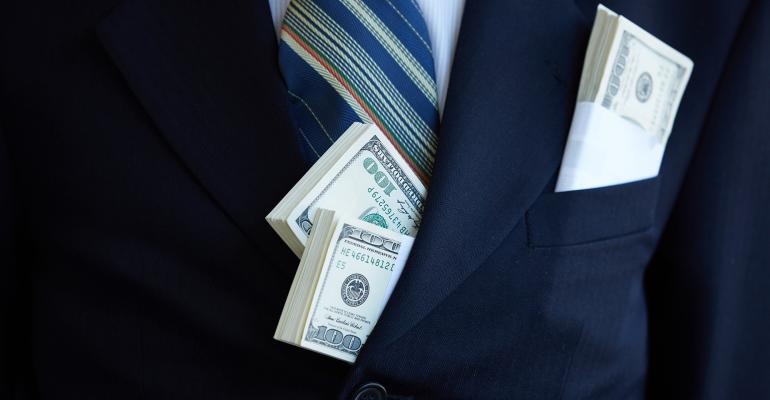 The executives that saw the biggest median compensation increase last year were CFOs.

Despite lower one-year total shareholder returns, U.S. REIT executives saw their compensation rise by a median of 7.0 percent in 2017, a slight bump from the 5.0 percent median increase they saw in 2016, according to a new study by FTI Consulting, Inc., a global advisory firm.

The study, which analyzed compensation changes among 566 incumbents across 160 publicly-traded REITs, found that CEOs saw their pay go up by a median of 6.0 percent. CEO bonuses ticked up by 3.0 percent last year, a drop from the 6.0 percent median bonus increase seen in 2016. One REIT, industrial property owner Prologis, added a bonus for its CEO tied to diversity and inclusion initiatives.

CEO pay has been increasingly scrutinized by shareholders and advocacy groups, resulting in increases that have been more modest than those seen among other executives. “This is consistent with trends we’ve seen in the prior few years,” said Katie Gaynor, managing director at FTI Consulting, during a webinar on the study’s results.

The executives that saw the biggest median compensation increase last year were CFOs. These executives’ pay jumped by 10.0 percent from 2016 to 2017. Meanwhile, those who held chairman positions saw the smallest increase at just 0.1 percent.

While one-year total shareholder returns for REITs have been weak, REITs’ operating fundamentals in general have been robust, notes Drew Babin, senior research analyst at Robert W. Baird & Co. Management teams have also been working to keep leverage low, which may explain why CFOs saw the biggest hikes in their compensations, he adds. “There are metrics like that that may be driving that compensation higher, despite the fact that total shareholder returns for REITs have underperformed,” he says.

According to the FTSE Nareit All REIT index, one-year total returns as of the end of June were 4.78 percent. Three-year returns were higher, at 9.23 percent.

REIT performance remains key to executive compensation. The number of REITs using performance-based equity compensation appears to have stabilized, as 83 percent use such programs.

While 84 percent of REITs that grant performance shares tie them to relative total shareholder returns, operational metrics are growing in usage, with 37 percent using at least one such metric in their long-term incentive program. That’s up from 34 percent in 2016.

The study also found that a three-year vesting period for time-vested restricted equity remains the most common form of equity compensation.

Among REIT CEOs, the compensation changes corresponded to the strength of their property sector.

Meanwhile, retail REIT CEOs, leaders of a sector grappling with multiple challenges, saw their total compensation drop by 2.0 percent. Year-to-date, total returns in the retail REIT sector are down by 2.18 percent, according to Nareit. In 2017, these companies saw total returns decline by 4.77 percent.

This year also marked the first time that public companies had to report their CEO pay ratios. Among REITs, there was great divergence of pay ratios; the highest was 567 to 1 (at Park Hotels & Resorts Inc.), and the lowest was approximately 4 to 1 (at Bluerock Residential Growth REIT and Saul Centers). The ratio also varied within specific property sectors. For example, the highest REIT CEO pay ratio in the hotel sector was at Park Hotels & Resorts, mentioned above. The lowest was 15 to 1, at Cheasapeake Lodging Trust.

During the webinar, Gaynor said that since this is the first year this metric was reported, the industry will be watching how it trends over time. Anticipating that, she noted some REITs opted to include additional ratios to account for whether their ratio was artificially higher or lower than it would otherwise be. “There are a lot of labor models that can be very different,” she said.