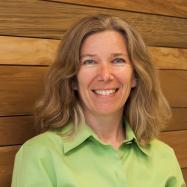 Elizabeth (Liz) Beardsley brings more than 20 years of professional experience working on environmental and climate issues both as an engineer and lawyer. In her current role, Liz serves as Senior Policy Counsel at the U.S. Green Building Council, a global environmental nonprofit best known for LEED, the world’s most widely used green building rating program. She provides strategic green building law and policy guidance and direction across the international, federal, state and local spectrum, and her work focuses on connecting building policy to climate mitigation.

Liz is a sought-after expert and spokesperson for USGBC who has been interviewed by dozens of media outlets such as Yale Climate Connection, BBC News: Business Matters, The Aaron Harber Show, ENR, Building Green, and Commercial Property Executive. She’s also an accomplished writer whose work has been published in Governing Magazine, Green Operations, USGBC+, and others. Since joining USGBC in 2014, Liz has represented the organization at four United Nations COP climate change conferences. Liz serves on the Board of the National Association of State Energy Offices (NASEO) and Virginia Energy Efficiency Council (VAEEC), and participates on committees of the Business Council for Sustainable Energy (BSCE) and the Alliance to Save Energy.

She has authored or co-authored policy papers such as Perspectives on State Legislation Concerning Lead Testing in School Drinking Water (2018) and Perspectives on Implementation and Effectiveness of School Green Cleaning Laws (2015).

Liz came to USGBC from the U.S. Government Accountability Office (GAO), where she was a Senior Attorney involved in evaluating government environment and energy programs. Prior to her legal career, she was an environmental engineer and Principal at Camp Dresser & McKee (now CDM Smith), where she focused on water issues and infrastructure planning.

Liz has a B.S. in Civil Engineering from Stanford University and a J.D. from the University of Virginia School of Law.

Integrating Community Into a Business Approach for Property Resilience
Apr 01, 2020
Resilience is not merely applying risk reduction and preparedness at a given site; but includes considering shared risks and resources across interconnected systems.