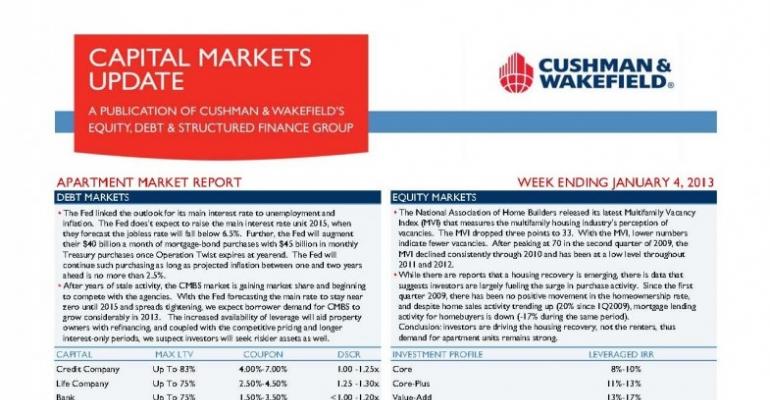 • The Fed linked the outlook for its main interest rate to unemployment and inflation. The Fed does’t expect to raise the main interest rate unit 2015, when they forecast the jobless rate will fall below 6.5%. Further, the Fed will augment their $40 billion a month of mortgage-bond purchases with $45 billion in monthly Treasury purchases once Operation Twist expires at yearend. The Fed will continue such purchasing as long as projected inflation between one and two years ahead is no more than 2.5%.

• After years of stale activity, the CMBS market is gaining market share and beginning to compete with the agencies. With the Fed forecasting the main rate to stay near zero until 2015 and spreads tightening, we expect borrower demand for CMBS to grow considerably in 2013. The increased availability of leverage will aid property owners with refinancing, and coupled with the competitive pricing and longer interest-only periods, we suspect investors will seek riskier assets as well.

• The National Association of Home Builders released its latest Multifamily Vacancy Index (MVI) that measures the multifamily housing industry's perception of vacancies. The MVI dropped three points to 33. With the MVI, lower numbers indicate fewer vacancies. After peaking at 70 in the second quarter of 2009, the MVI declined consistently through 2010 and has been at a low level throughout 2011 and 2012.

• While there are reports that a housing recovery is emerging, there is data that suggests investors are largely fueling the surge in purchase activity. Since the first quarter 2009, there has been no positive movement in the homeownership rate, and despite home sales activity trending up (20% since 1Q2009), mortgage lending activity for homebuyers is down (-17% during the same period). Conclusion: investors are driving the housing recovery, not the renters, thus demand for apartment units remains strong.