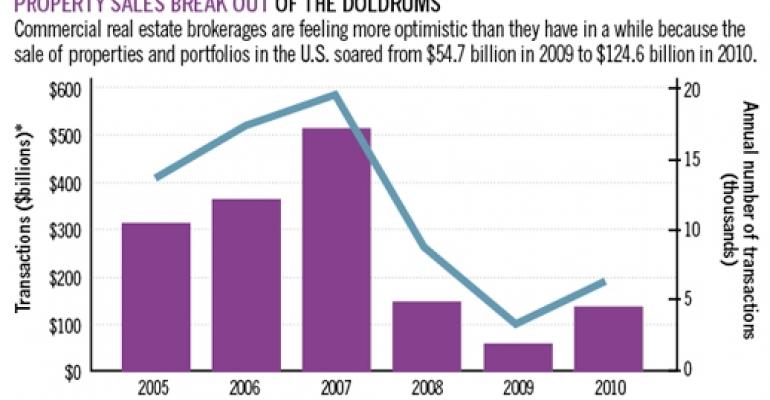 Leasing and investment sales transactions continue to recover this year as many newly confident commercial brokerages turn to a different kind of transaction — acquiring competitors.

In a race to expand their geographic reach and add fresh expertise, many of the biggest brokerages have been on a buyout binge this year, with much of the activity centered in overseas markets.

Both JLL and CBRE, already global in scope, are intent on building even bigger power bases in key international real estate hubs. Rivals are following suit, though many are still broadening their domestic bases.

“The industry will continue to consolidate,” says Michael Lafitte, president of the Americas for CBRE. “Many companies in the middle will feel pressure to acquire new capabilities in areas like research and facilities management and client accounting, and get bigger. If they don't, they'll be candidates to get rolled up. Scale is increasingly important in this industry.”

Loralee Martin, chief operating officer at JLL, reveals that smaller rivals are beginning to present themselves for sale. “Their clients are asking for capabilities beyond what their current footprint allows,” she says. “Global capital is flowing to Asia and other places, and clients today demand an extended platform into those markets.”

JLL already had a big London office, she adds, but the addition of King Sturge there “gives us much deeper capability in London, and also positions us as the clear No. 1 brokerage in the city.”

Improving real estate fundamentals have played a role in spurring the merger activity, executives say. Property sales volume more than doubled in 2010 to $124.6 billion in the U.S. (surveying transactions of $5 million and more), according to Real Capital Analytics, though the 2009 benchmark comparison of $54.7 billion was anemic by any standard.

Most observers predict that transaction volume in 2011 will be up 30% or more. “Our transaction pipeline continues to get bigger and bigger,” says John Kerin, president and CEO of Marcus & Millichap Real Estate Investment Services.

Fred Schmidt, president and COO of Coldwell Banker Commercial, says that multifamily is the best sector of all right now. “The industrial sector is also looking better. As for office, core assets in entryway cities like New York and Washington, D.C., are doing fine. All sectors have been helped by the very small supply of new product coming on board.”

An improving industry has got many leading brokers itchy to move, executives say. Transwestern has made several key hires in staffing up its New York office recently.

“People are in play,” says Robinson, the head of the New York office. “We're talking to a large number of brokers and hope to pick off some high-quality talent to come over and join us here.”

Yet Robinson is quick to add that the general dislocation of personnel might not last much longer. Brokers are apt to change jobs in down markets, when they're leaving behind a minimal book of business. “Once people have lots of deal activity again, they will be reluctant to move.”