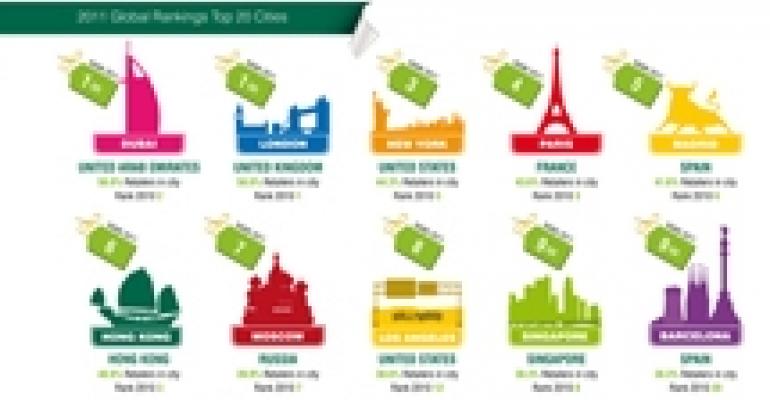 The world’s top retailers are scouting markets with high rates of growth and avoiding ones most likely to be hit by fiscal austerity packages according to the to the 2011 edition of How Global is the Business of Retail? by CB Richard Ellis Global Research and Consulting.

The report—now in its fourth year—examines the global footprints of 300 of the world’s top retailers across more than 200 cities to identify trends in global retail expansion at national and local levels. It will be released on Wednesday, April 13, but CBRE provided Retail Traffic with a sneak peek at the report’s findings.

This year’s results found that Dubai had climbed to the top of the rankings as the most targeted market—sharing that distinction with London. Overall, 56 percent of all international retail brands are in Dubai. Nearly 13 million square feet of retail space has come into the market since 2006, according to CBRE. A wealthy consumer base and lack of competition from local retailers have helped elevated its status, according to respondents.

According to the report, “A key factor in pushing Dubai to the top of the rankings has been the influx of U.S.-based retailers in the last 18 months. Traditionally U.S.-based retailers have not been keen to expand into the Middle East because of reluctance to use the franchise model which is prevalent there. With limited opportunities in their own market, more retailers have taken the plunge and made in-roads into the Middle East, typically starting in Dubai. At the same time, mall operators in Dubai are continually looking to attract new brands to differentiate their scheme from the ever-growing competition and have been actively seeking U.S. retailers.”

Dubai and London are followed in the top retail city rankings by New York (44.3 percent of international retailers), Paris (43.6 percent) and Hong Kong (40.6 percent). The rest of the top 20 includes a mix of traditional and emerging markets.

According to the report, American retailers are the most global, with 73 percent being present in all three regions. This compares with 45 percent of retailers from Europe, Middle East and Africa (EMEA) and 26 percent of those from Asia Pacific.

“Historically many U.S. retailers have been reluctant to adopt the retail franchise model,” Anthony Buono, CBRE executive managing director of retail services, said in a statement. “But with emerging markets continuing to show greater prospects for growth than the U.S., retailers are readily adopting franchising as a near-term strategy, to make inroads into the Middle East, South America and Asia Pacific.”