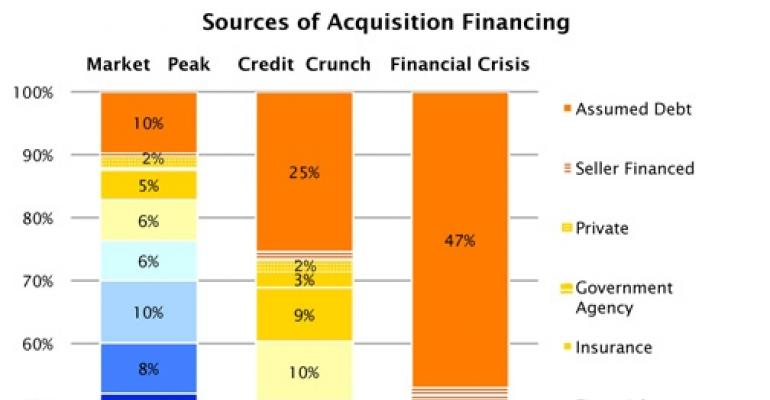 Changes in the Sources of Acquisition Financing

Real Capital Analytics' Capital Trends Monthly report reveals how quiet the investment sales market has become on retail properties. In line with every core property type, retail asset sales volume, at $1.9 billion, was down more than 90 percent from the market peak two years earlier and off 74 percent from the same quarter a year ago. However, a backlog of properties is beginning to build. In the first quarter, more than $6.5 billion of retail properties were listed for sale and already another $3.0 billion has been added in April. In addition, some $3.4 billion of retail assets were added to RCA's Troubled Assets Radar in the first quarter, bringing the total to $16.8 billion at quarter's end.

One of the biggest changes from the market's peak is how deals are getting financed. In the past, CMBS accounted for a big piece of the pie—40 percent of all financing. That's dried up and CMBS is no longer a way to fund deals. Instead, today more deals are financed through seller-provided finance than any other source of capital. Real Capital put together an interesting chart showing the evolution in funding sources from the market's peak to the credit crunch to the conditions today.

According to Real Capital's report, "The unwillingness of any other group to step in to help fill this massive funding gap is a primary reason that sales volume has fallen so far off the peak. Even though the percentage of all-cash deals is up significantly, debt is still required to complete the majority of transactions. Since all-cash buyers are also demanding—and often getting—significant price concessions, assumable mortgages and seller financing have quickly emerged as the primary alternatives."