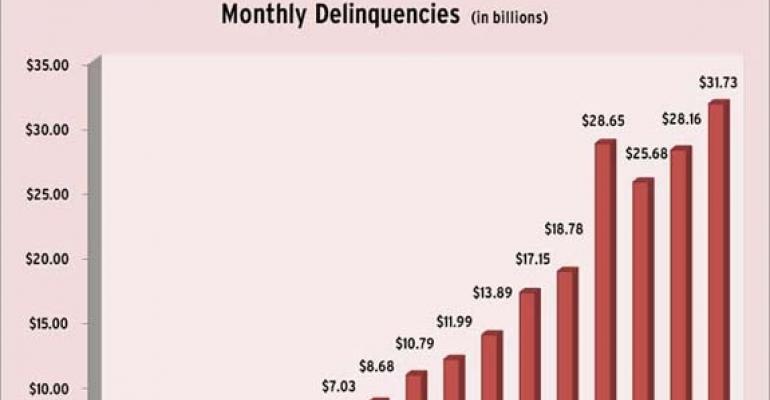 According to Horsham, Pa.-based real estate research firm Realpoint LLC, the delinquent unpaid balance for CMBS increased to $31.73 billion in September from $28.16 billion a month prior. The figure marks a 583 percent increase from September 2008 and is now 14 times the low point of $2.21 billion recorded in March 2007.

The company also reported that special servicing exposure continues to rise dramatically on a monthly basis, having increased for the 17th straight month through September 2009. The unpaid balance for specially serviced CMBS increased on a net basis by $4.54 billion in September 2009, up to a trailing 12-month high of $54.46 billion from $49.92 billion in August.

"Our default risk concerns for the 2005 to 2007 vintage transactions relative to underlying collateral performance and payment ability are more evident on a monthly basis," the company wrote in its monthly report. "Both the volume and unpaid balance of CMBS loans transferred to special servicing on a monthly basis continues to raise questions about underlying credit stability in today’s market climate for these more recent vintage CMBS deals."

Overall, Realpoint now expects the delinquent unpaid CMBS balance to continue along its current trend and grow between $40 and $50 billion before the end of 2009. "Based upon an updated trend analysis, we now project the delinquency percentage to grow between 5 percent and 6 percent before year-end 2009 (potentially approaching and surpassing 7-8 percent under more heavily stressed scenarios through the first half of 2010)," the company wrote in its monthly delinquency report.