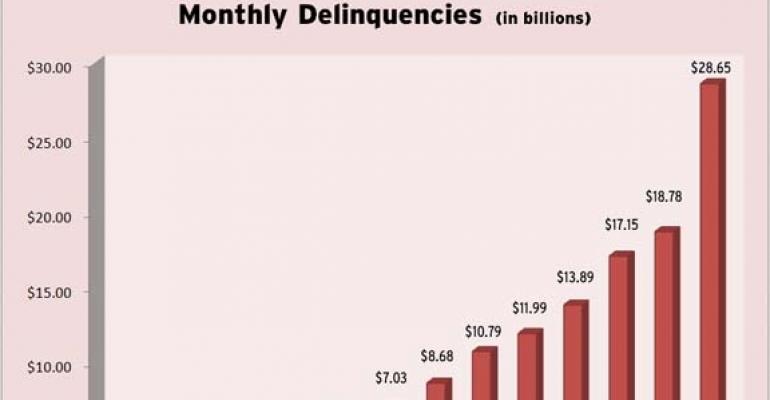 According to Realpoint LLC's Monthly Delinquency Report, the delinquent unpaid balance for CMBS increased by a substantial $9.87 billion in June, up to a trailing 12-month high of $28.65 billion. Overall, the delinquent unpaid balance grew for the tenth straight month and is now up 585 percent compared with the same month last year. The level of delinquencies is now 13 times greater than the low point of $2.21 billion in March 2007.

The total unpaid balance for all CMBS pools under review by Realpoint was $817.4 billion in June 2009, down from $825.4 billion in May (affected by some servicer and trustee reporting delays). Both the delinquent unpaid balance and delinquency percentage over the trailing twelve months are clearly trending upward.

Realpoint expects the delinquent unpaid CMBS balance to continue along its current trend and grow in excess of $50 billion to $60 billion before the end of 2009. The firm also expects the delinquency percentage to grow in excess of 6 percent before year-end 2009 (potentially approaching and surpassing 8 percent under its heavily stressed scenarios).

According to the firm's report, "The outlook is mostly due to the reporting of several large loans from recent vintage transactions that continue to show signs of stress and default, along with continued balloon maturity defaults from more seasoned vintage transactions. In addition, while we maintain our negative outlook for both the retail and hotel sectors for 2009, we are closely monitoring the negative trends surrounding several large struggling multifamily loans in the New York MSA that have near-term default risk, and the lack of new issuance to offset the continued increases in delinquent unpaid balance."