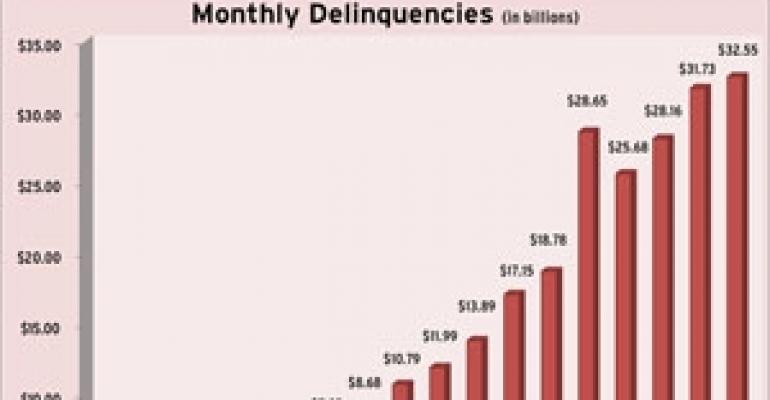 According to Horsham, Pa.-based real estate research firm Realpoint LLC, the delinquent unpaid balance for CMBS increased to $32.55 billion in October, up from $31.73 billion in September. The figure is a 504 percent increase over October 2008 and is more than 14 times the low point of $2.21 billion recorded in March 2007.

Retail loans remained the greatest contributor to overall CMBS delinquency, at 1.12 percent of the CMBS universe and 28 percent of total delinquency. However, the retail default rate fell slightly to 4.05 percent in October from 4.20 percent in September. The firm counts 919 loans worth an aggregate $9.1 billion on retail properties as delinquent. In addition, retail accounts for 34.2 percent of the assets in special servicing.

The total unpaid balance for CMBS pools reviewed by Realpoint for the October 2009 remittance was $810.9 billion, up from $805.34 billion in September.

Based upon an updated trend analysis, Realpoint now projects the delinquency percentage to grow between 5 percent and 6 percent through the first quarter of 2010 and potentially surpass 8 percent "under more heavily stressed scenarios" through mid-2010.