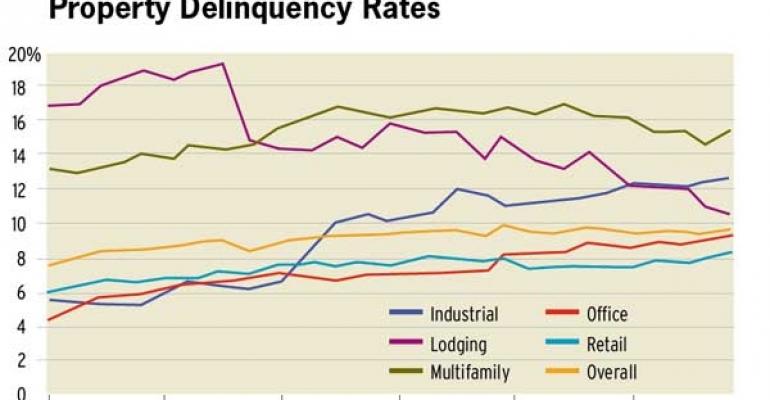 CMBS Delinquencies Spike, But Outlook for the Year Remains Stable

The 30+ days delinquency rate for U.S. CMBS loans climbed a whopping 31 basis points in March to 9.68 percent, according to research firm Trepp LLC. The jump marked the second largest monthly delinquency increase since July 2011 and contrasted drastically with February, when CMBS delinquencies posted a monthly decrease of 15 basis points.

The 9.68 percent figure was 26 basis points higher than the 9.42 percent CMBS delinquency rate recorded during the same period last year.

The percentage of loans considered serious delinquent, which includes those that have been in delinquency for 60+ days, those in foreclosure, REO or non-performing balloons, was also up in March, by 16 basis points to 9.10 percent.

Yet Fitch Ratings, a global rating agency, estimates that new CMBS defaults in 2012 should be lower than the defaults reported in 2011, when they totaled $13.7 billion in 950 loans. The relatively low new default rate last year (it was more than $9 billion lower than the default rate reported in 2010) might be partly attributed to the fact that special servicers have been modifying many loans before they officially reach default status. Improving property fundamentals also played a role.

“Commercial real estate performance improved during the year, as the general economy saw some level of stabilization,” Fitch researchers write. “As a result, the rate of new defaults slowed to its lowest amount since 2008.”

Given that market conditions remain stable, Fitch expects that the cumulative CMBS default rate will reach 14.5 percent by the end of 2012, representing a 180 basis points increase over 2011.

According to Trepp, about $5 billion in CMBS loans became newly delinquent in March, putting upward pressure on the overall delinquency figure, but the increase might have been even higher if the $1 billion CNL Hotel and Resorts Portfolio loan was not reported as current at the last moment.

Retail properties experienced the lowest increase in CMBS delinquency at 8.24 percent—a 24 basis points increase from the month prior. And hotel properties were the only ones to show improvement, with the delinquency rate in the hotel sector dropping 42 basis points, to 10.63 percent.

In fact, Fitch reports that loans backed by office properties had the highest level of new defaults of all property sectors in 2011. A total of 280 office loans defaulted last year, representing 38.6 percent of the $5.3 billion in existing office loans. The cumulative default rate for office-backed loans reached 10.3 percent.

The firm predicts that the sector will continue to struggle this year as office recovery in primary markets has come much faster than in secondary and tertiary markets. In some struggling cities, landlords have had to lower rents to keep tenants in place.

“Given the long-term nature of office leases, the lower rental rates and subsequent lower cash flows will cause performance in the office sector to lag other property types for several years. Fitch expects office properties in stresses markets to continue to default in elevated numbers,” according to the report.