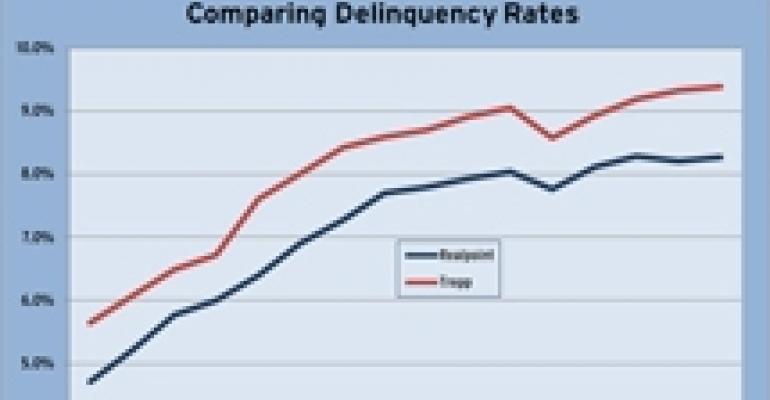 CMBS delinquency rates rose again in February, according to the two firms that track the sector.

As of the end of February, the CMBS delinquency rate stood at 8.28 percent according to Horsham, Pa.-based Realpoint LLC and at 9.34 percent according to New York City-based Trepp LLC. Both firms showed the delinquency rate rising from January. The figure was a new high for Trepp while it stood at a hair below the 8.29 percent high that Realpoint measured in December 2010.

Industrial properties have emerged as a new trouble spot, according to both firms' numbers. As recently as three months ago, industrial properties boasted the lowest delinquency rates of the major property types, but have spiked since. Trepp measured the industrial delinquency rate as 10.44 percent—up from 6.64 percent three months ago and 4.75 percent a year ago. Realpoint measured the rate at 9.67 percent—up from 6.1 percent in November and 4.2 percent in February 2010.

According Realpoint, the delinquent unpaid balance for CMBS rose $330.4 million, up to $62.42 billion from $62.09 billion a month prior. This followed the previous month’s slight decrease of $228.8 million—just the second recorded decrease in the past 12 months.

There was a net decline in both the 30-day and 60-day delinquency categories, according to Reapoint. According to the firm, “With the ongoing rapid pace of loan liquidations, modifications and resolutions, the two most distressed categories of Foreclosure and REO increased by $1.89 billion as a whole (8 percent) from the previous month and remain up by $15.18 billion (145 percent) in the past year.”

The total unpaid balance for CMBS pools reviewed by Realpoint for the February remittance was $754.27 billion, down from $756.02 billion in January.

According to Realpoint, “The movement in both delinquent unpaid balance and percentage is now clearly being impacted by the size and amount of loan liquidations, modifications, extensions and resolutions reported on a monthly basis, leading to a potential slow-down in the reporting of new delinquency for the remainder of 2011.”

By property type, in December, multifamily loans topped retail loans as the greatest contributor to overall CMBS delinquency. Retail loans had been the greatest contributor for six straight months prior to June 2010. Delinquent multifamily loans account for 2.21 percent of the CMBS universe and 26.8 percent of total delinquency.

Hotels, meanwhile, had the highest delinquency rate—12.17 percent, although the figure has been improving in recent months. The retail default rate increased slightly to 7.4 percent, up from 7.3 percent in January and up from 5.4 percent one year ago.

In its monthly report, Realpoint wrote, “Despite a leveling off over the past five months, we still consider retail delinquency a legitimate concern for 2011. A prolonged economic recovery could have further impact on consumer spending and cause retailers to continue to struggle. We also cannot rule out additional store consolidation, closings and potential bankruptcies along with growing balloon maturity default risk as retail collateral continues to suffer from the experienced decline”

Meanwhile, in its analysis, New York City-based Trepp said that the CMBS delinquency rate rose to 9.39 percent in February, topping the previous high of 9.34 percent in January.

According to Trepp, “The faith that investors have shown in the legacy U.S. CMBS market over the last few months was validated on Wednesday when the Trepp Delinquency Report reported that the core delinquency rate for February had one of its smallest increases since the beginning of the credit crisis. In February, the delinquency rate for U.S. commercial real estate loans in CMBS edged up 5 basis points putting the rate at 9.39 percent. That is once again the highest percentage of loans 30+ days delinquent, in foreclosure or REO in the history of the CMBS market. This 5 basis point increase however is arguably the smallest increase since we started publishing our numbers 18 months ago. There was a dip in the delinquency rate in October 2010 when the huge Extended Stay Hotel loan was liquidated at a loss. If one removes the ESH loan from the equation, February’s 5 basis point jump is the smallest in almost two years. The rate of increase has averaged 23.8 basis points per month over the previous twelve months (after backing out the Stuyvesant Town impact in March and the Extended Stay Hotels impact in October).”