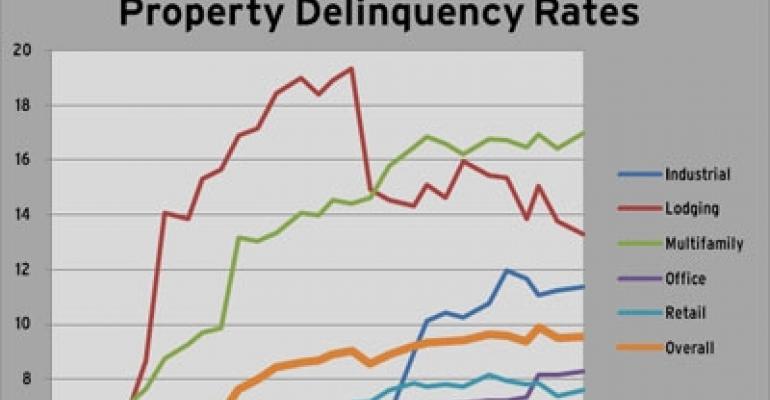 CMBS delinquencies stabilized in September, according to two reports. Trepp LLC said that the rate inched up 4 basis points while Fitch Ratings reported that the delinquency rate fell 5 basis points.

After a leap in July and a big dip in August, CMBS delinquencies were flat in September, according to New York City-based research firm Trepp LLC.According to the firm, the delinquency rate for U.S. commercial real estate loans in CMBS inched up 4 basis points to 9.56%.

“There is no denying that the tone in the CMBS market has been acutely negative for the past three months,” Trepp wrote in its report. “The market has taken a series of body blows over that time period: spreads have risen sharply, lenders have pulled in the reigns on new loans, the U.S. economy has weakened, and many have speculated that the pricing of trophy properties in the U.S. has come too far too fast.”

Trepp pointed to two reasons as to why the rate stabilized. A number of trophy sales were announced in September, “indicating that this part of the market was not ready to retreat just yet and that lenders were still willing to do deals for the right assets.” Secondly, spreads settled down later in the month and traded in a narrow range—in contrast to the volatility of the stock market.

The percentage of loans seriously delinquent (60+ days delinquent, in foreclosure, REO or non-performing balloons) was not quite as promising, Trepp noted. That rate is now 8.95%, up 16 basis points for the month.

Fitch Ratings, meanwhile, reported that the CMBS delinquency rate actually decreased in September from 8.65% the month prior to 8.60% in September. The firm cited the continued recovery in the hotel sector as the prime factor in driving the overall rate down.

According to Fitch, “Aside from hotel sector gains, September proved to be a quiet month for both new delinquencies and resolutions. In fact, the $1.5 billion of new delinquencies in September represents the lowest volume of new defaults in almost three years (when the index stood at 1.28% at February 2009).”

In Fitch’s view, after hitting an all-time high of 9.01% in July, CMBS delinquencies are now down each of the last two months.