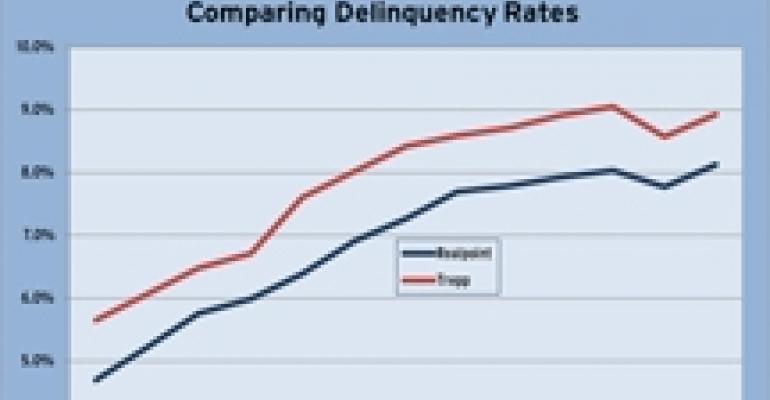 CMBS delinquency rates bounced back up in November after improving in October according to the two firms that track the sector.

According Realpoint, the delinquent unpaid balance for CMBS rose $1.94 billion, up to $61.11 billion from $59.18 billion a month prior. The increase was greater than in previous months, but still below the first six months of 2010 when delinquencies grew by an average of $3.14 billion per month.

Outside of 60-day category, the remaining delinquency categories each increased, fueled by further delinquency degradation and credit deterioration. According to Realpoint, “Despite ongoing loan liquidations, modifications and resolutions, the two most distressed categories of foreclosure and REO grew by $893 million as a whole (3.95 percent) from the previous month and remain up by $14.71 billion (168 percent) in the past year (up from $8.78 billion in November 2009).”

The total unpaid balance for CMBS pools reviewed by Realpoint for the November remittance was $750.2 billion, down from $761.49 billion in October.

According to Realpoint, “The movement in both delinquent unpaid balance and percentage is now clearly being impacted by the size and amount of loan liquidations, modifications, extensions and resolutions reported on a monthly basis, leading to a potential slow-down in the reporting of new delinquency for the remainder of 2010 and 2011.”

By property type, in November, multifamily loans topped retail loans as the greatest contributor to overall CMBS delinquency for the sixth straight month. Hotels, meanwhile, had the highest delinquency rate—14.05 percent. Retail loans had been the greatest contributor for six straight months prior to June. Delinquent multifamily loans account for 2.16 percent of the CMBS universe and 26.6 percent of total delinquency. The retail default rate increased slightly to 7.15 percent, up from 6.9 percent in October and up from 4.2 percent one year ago.

In its monthly report, Realpoint wrote, “Despite a leveling off over the past five months, we still consider retail delinquency a legitimate concern for 2011. A prolonged economic recovery could have further impact on consumer spending and cause retailers to continue to struggle. We also cannot rule out additional store consolidation, closings and potential bankruptcies along with growing balloon maturity default risk as retail collateral continues to suffer from the experienced decline. Some of this may be mitigated in the short-run by temporary tenants occupying space for the holidays.”

Meanwhile, in its analysis, New York City-based Trepp said that the CMBS delinquency rate rose to 8.93 percent in November up from 8.58 percent in October. The rate is the second highest on record trailing only September’s figure of 9.05 percent.

According to Trepp, “For months, we've spoken about the leveling off of the delinquency rate for U.S. commercial real estate loans in CMBS. Beginning in June, what had been 40 basis point increases each month started to turn into 10 to 20 basis point increases. Finally, in October, came the first dip in the delinquency rate in over a year giving many (including us) the belief that the peak was nearing. We frequently pointed out however that as special servicers became more adept at processing troubled loans, the delinquency rate would continue to see downward pressure. The November numbers throw cold water on the enthusiasm that's built up over the last six months.”