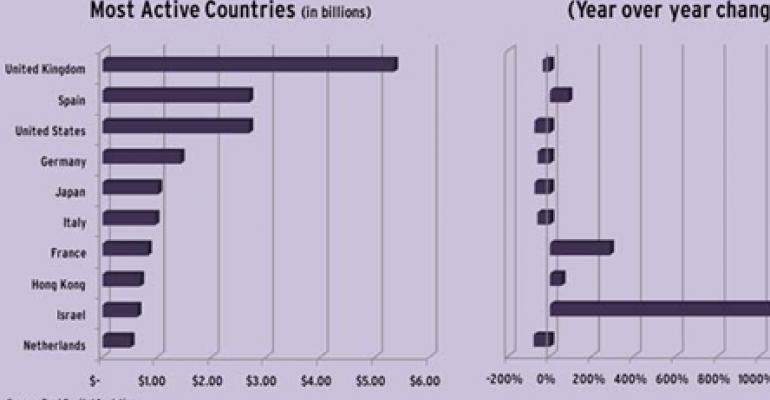 Real Capital Analytics' mid-year Global Capital Trends report reveals that total investment in retail real estate around the world was down 61 percent from 2008. Overall, the total deal volume amounted to $20.2 billion. Furthermore, deal volume in the second quarter of 2009 was lower than the first quarter of 2009, making retail the only property sector that suffered a drop from the first to second quarters.

Still, Real Capital expects the retail sector to see a modest resurgence of transition activity in the third quarter.

According to the firm, "The turbulence of retail property investment is evident in rankings of the most active markets: Second-tier Sheffield stole the top spot due to the Meadowhall transaction, the largest single asset sale (albeit a partial interest) in H1’09. Three other outliers invaded the top ten as activity fell in primary markets: Madrid, Tel Aviv and Taipei. Osaka’s showing was driven by the $422 million sale of a single department store." (The Meadowhall deal was a $1.7 billion transaction on a 1.5-million-square-foot property that took place in February.)

Overall, the United Kingdom ranked as the most active country for retail deals in the first half of the year, displacing the United States. Spain also jumped ahead of the U.S. thanks largely to one deal—a $2.0 billion disposition of a 1,288-property bank portfolio. Spain was one of the few countries were volume was greater than last year. The $2.69 billion in deals represented an 88 percent jump over the first half of 2008. Other markets that posted year over year gains included France (up 286 percent) and Israel (up 1,231 percent).