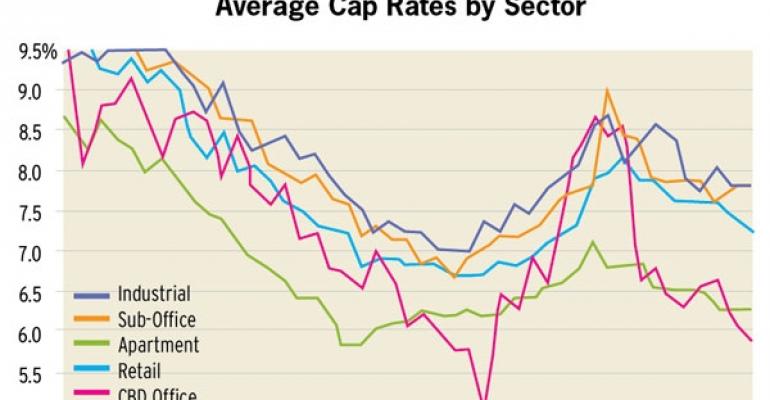 Investors continue to spend big on commercial real estate: Buyers and sellers exchanged $50.3 billion in commercial properties in the U.S. in the first quarter of 2012, according to the latest report from New York City-based data-firm Real Capital Analytics. That’s up 40 percent from the same period last year.

But for the recovery in sales to keep growing, property investors will need to look beyond the safest deals in the strongest markets. “The momentum has slowed,” says Dan Fasulo, managing director for Real Capital. That’s because there are only so many class-A properties located in gateway cities such as New York and Washington, D.C. for investors to buy. “There is a lack of supply on the market,” Fasulo says.

Investors have pushed the prices for these top properties high above the rest of the market. Average capitalization rates, which express operating income as a percentage of the sales price, fell to 5.4 percent for office properties Manhattan in the first quarter, compared to an average cap rate of 6.8 percent for class-A office properties in the suburbs of major metro areas. That represents a huge difference in price. “Everyone was saying this last year, but the trend has become so much more extreme,” says Fasulo. “Cap rates are still falling in Manhattan.”

Multifamily properties are especially desirable as an asset class because of the safety of strong demand from renters. Overall, apartment cap rates averaged 6.2 percen —but class-A multifamily properties in the top 40 metros earned average cap rates of 5.8 percent in the first quarter, according to Real Capital. The biggest six major metros have accounted for 44 percent of all apartment sales over the last year, well above the decade average of 39 percent. “With this additional investor interest come premium prices,” according to Real Capital.

Fasulo recently spoke with the frustrated owner of a smaller, suburban office property in Monmouth, N.J., occupied by a hodgepodge of local and regional tenants. The boom in commercial property sales has largely passed over places like these. “Their cap rates haven’t changed much,” he says.

But help may be on the way. “Although Manhattan and [Washington,]D.C. proper continue to see cap rate compression, metro averages have started to plateau as investment migrates into the higher yielding suburbs,” according to Real Capital.

The revival of the conduit lending business could help investors finance deals outside of the core markets. Conduit loans have historically provided financing for class-B and class-C properties in secondary markets. Today, non-multifamily properties in the middle of the country often depend on conduit loans. Revived interest from bond investors for commercial mortgage-backed securities has fueled the conduit recovery.

“The CMBS market has exceeded expectations. The bond buyers are there,” says Fasulo. “Unless something blows up in Europe, we could have a really strong second half.”