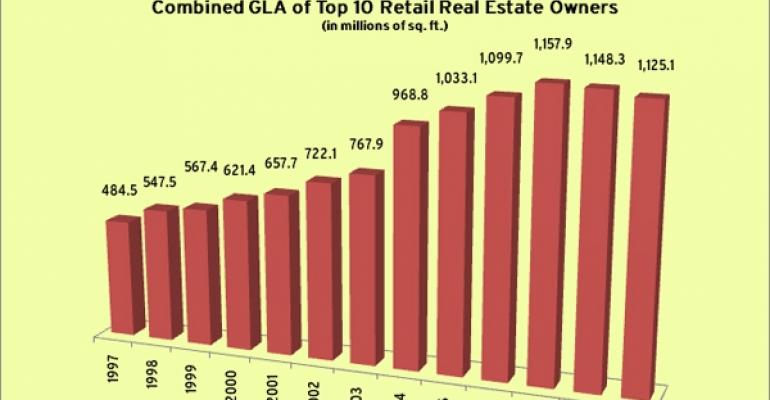 For the second year in a row, the top owners and managers of retail real estate in the United States did little to change their portfolios. In fact, the amount of space controlled by the top 10 owners of retail real estate fell slightly in 2009 from the year prior. For the most part, firms seem focused on keeping current portfolios in order rather than going out and buying new properties.

Our March/April issue will feature the top 50 owners and managers of retail real estate. And we will soon post an expanded listing to our Web site that will feature listings that include the top 100 (and a little beyond) owners and managers along with further information about many companies’ portfolios, including the types of properties owned or managed and the geographic composition of the portfolios.

In addition, some of the names have changed. Back in 1999, the Richard E. Jacobs Group and Benderson Development ranked among the top 10. The Jacobs Group sold much of its mall portfolio to CBL & Associates in 2000. Benderson, meanwhile, sold a big chunk of properties to Developers Diversified Realty. Benderson still ranks in the top 25, however.