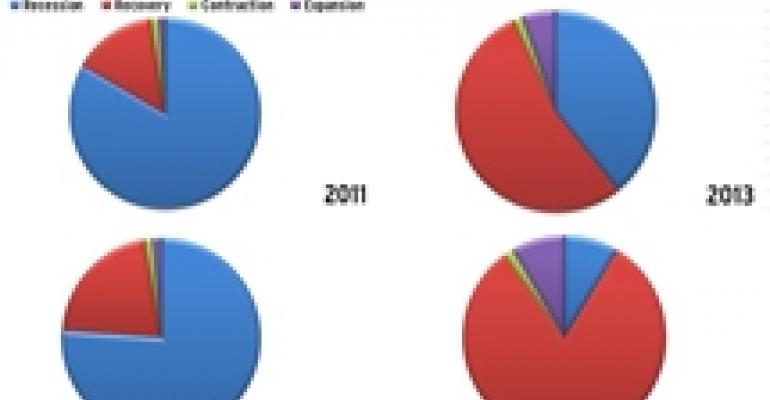 The PwC Real Estate Investor Survey for the second quarter of 2011 finds that while investors overall seem optimistic about commercial real estate, there is a bit more caution when it comes to the retail sector.

Overall, 83 percent of the markets surveyed remained in a recessionary mode in 2011 and investors feel that only 25 percent of these markets will transition to “expansion” mode by 2014.

In the 31 markets PwC tracks across all property sectors, the cap rates have compressed more quickly out of the recent recession than in previous downturns. In addition, “overall real estate cap rates present an attractive yield when compared to other income producing asset classes,” according to PwC.

In 27 markets, cap rates decreased in the second quarter from the first quarter. Cap rates increased in three markets and were flat in one market. According to the survey, “Strong buyer interest, low interest rates, and a positive economic outlook continue to be recognized in investors' expectations that overall cap rates will either hold steady or decline over the next six months.”

The apartment sector continues to lead commercial real estate and has shown the most strength. A spotty employment picture, meanwhile, continues to take its toll on office space demand while the industrial sector has started to show some positive signs with macro measures, such as the Institution for Supply Management’s indices, showing the beginning stages of a recovery.

According to the report, “Consumers remain skittish as pessimistic reports continue to surface about the housing and labor markets. As a result, the bulk of the U.S. retail sector will be in recession through year-end 2012. Although the amount of U.S. retail stock in recession will greatly decline by year-end 2013, a significant recovery is not expected until year-end 2014.”

The PwC survey has four grades for markets.

Of the 83 markets, the ones where the retail sector is currently somewhere in the recovery or expansion phases today, according to surveyed investors, include Buffalo, N.Y., Long Island, N.Y., Pittsburgh, Oakland-East Bay, Calif., San Francisco, Austin, Texas, Ft. Lauderdale, Fla., Fort Worth, Texas, Lexington, Ky., Nashville, Tenn., and New Orleans.

By 2012, investors expect Philadelphia, Las Vegas and Richmond, Va., to begin recovering and by 2014 the only remaining markets contracting or in recession will be New Haven, Conn., Cincinnati, Ohio, Detroit, St. Louis, Mo., Atlanta and San Antonio, Texas. However, only Buffalo, Omaha, Neb., San Francisco, Austin, Greensboro/Winston-Salem, N.C., Houston, Lexington, Ky., and New Orleans will be in an expansion phase.

In looking at regional malls, investors find a bifurcated market.

According to the report, “On one side, stabilized, REIT-owned assets are showing steady and/or improving performances and are not being offered for sale. … On the other side, a flood of lower quality malls are being offered for sale by some of the top players in this sector, including Westfield Group, Simon Property Group, and General Growth Properties.”

The bifurcation in the market is also evident in cap rates—which diverged by 175 basis points between class-A+ malls and class-B+malls in the second quarter of 2011.

Power centers were greatly affected by the recession, which resulted in the closures and bankruptcies of many big-box tenants. But the sector has begun to stabilize—even with the recent Borders bankruptcy. More power centers are also trading hands.

Lastly, the strip center market continues to stabilize and even prosper in some areas, according to PwC, citing statistics from Reis Inc.

“Cities that posted strong year-over-year declines in vacancy include Chattanooga, where the vacancy rate fell 200 basis points over the past year; Pittsburgh, where it dropped 140 basis points; and Syracuse, where it declined 130 basis points over the past 12 months,” according to the report. “As the national strip shopping center market shows signs of improvement and stability, its average overall cap rate remains on a downward trend, falling for the sixth consecutive quarter. Over the next six months, about 82.0% of Survey participants foresee overall cap rates holding steady in this market.”