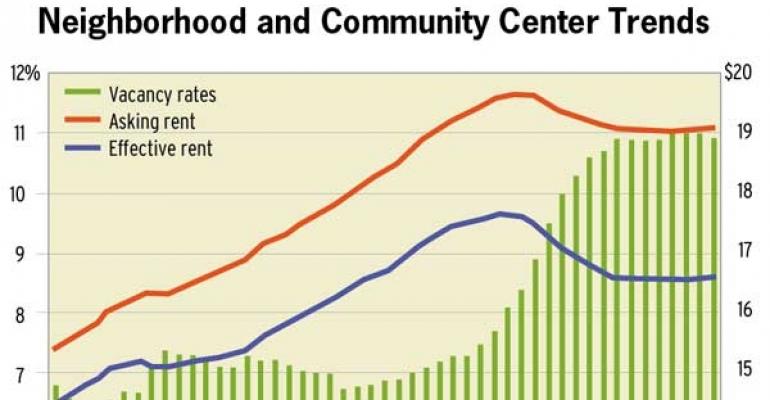 Modest Recovery Continues, According to Reis

Terrible headlines from overseas are weighing down our recovery … again. If we aren’t worried about Greece leaving the Euro (February), we’re worrying about international oil and gas prices (April) or Spanish sovereign default (late April). Now Greece is in the headlines again—and that’s bad news for commercial real estate.

“It certainly increases the risk that we are going to have another fairly unspectacular year,” says Ryan Severino, senior economist for New York-based real estate research firm Reis LLC.

“Fairly unspectacular” seems to be the theme behind the numbers in the first quarter reports from Reis. Our modest recovery will continue to be modest until severe uncertainty ends and strong job growth returns, says Severino.

Retail has begun to slowly improve, but the sector is still far from healthy. For example, the vacancy rate for neighborhood and community shopping centers fell for the first time in seven years. Rents also increased, inching up 0.1 percent, continuing the increase in the fourth quarter. “I think we are finally at a point of stabilization,” says Severino. These smaller retail settings have been one of the weakest property types during the crash and its aftermath.

However, effective rents for neighborhood and community shopping centers are still stuck at 2005 levels.

He calls the recovery in the market for office properties “tepid.” At least new supply is not a problem. Few new projects opened just before the crash because of high construction costs, and fewer new properties have started construction in the recovery. However, weak supply is matched by weak demand.

“Despite strong profit margins and balance sheets, companies have been reluctant to expand payrolls,” says Severino. Most of the few new jobs so far in this recovery tend to be in other sectors, from the food and beverage business to healthcare.

Not only are apartments markets strong on average—nearly all apartment markets are improving. Effective rents rose in 82 metro areas in the first quarter, according to Reis.

Fairfield County, Conn., is the only metro area in the country where rents fell. But with a vacancy rate of just 4.7 percent, apartments in Fairfield County are hardly in trouble.

On average, apartment vacancies fall below 5 percent in the first quarter in the U.S.—the strongest vacancy rate since late 2001. Our tepid recovery continues to be good for apartments. As long as potential homebuyers hesitate to buy, they will likely continue to rent.

For all of these property types, the markets seem have stabilized. Even in the retail markets, vacancies, occupancies and rents all improved in a majority of the 80 metro areas tracked by Reis.

For real estate investors that means it may no longer be necessary to focus only on the safest, core markets.