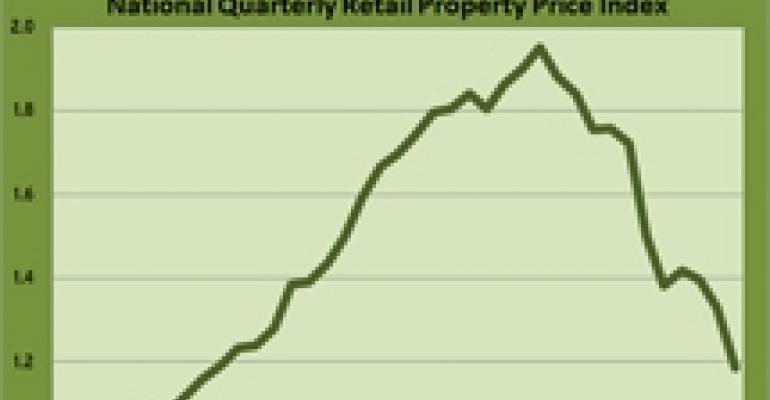 The Moody/REAL National Quarterly Retail Index dove by more than 14 basis points in the second quarter indicating that retail property values are now at their lowest level since the fourth quarter of 2002.

The index, which stands at 118.58, experienced its second largest quarterly decline since reaching its peak during the third quarter of 2007. Only the first quarter of 2009—with a 22 basis point drop—showed a greater drop. The retail index overall is down 39.3 percent from its high point of 195.19.

Retail is also the worst sector in the past 12 months. The national retail index is down 14.3 percent during that period compared with a 5.1 percent drop in the industrial index , a 4.7 percent decline in for office prices and a 2.5 percent increase in apartment values.

The picture is a bit different when looking at the top 10 MSAs. In those markets, the retail index actually rose 2.0 percent during the quarter, edging out the industrial and office and indices while trailing a 6.0 percent increase in the apartment index. That result followed a 19.3 percent decline in the first quarter. Prices in the top 10 MSAs peaked in the last quarter of 2007 and are currently down 35.5 percent.

Overall, the Moody’s/REAL All Property Type Aggregate Index showed a 4 percent drop in June as that index continues to bounce along a bottom. The index, which stands at 112.51, is still above the low point of 107.98 reached in October 2009. Since then it has risen in five months and declined in three. Since the market peak in October 2007, commercial real estate values measured by the index have deflated by 41.4 percent.

“We expect property prices to remain choppy for some time as commercial real estate markets and the broader economy continue their slow recovery from the recession,” Moody’s researchers wrote in their August report. “Sovereign debt problems, lingering unemployment in the United States, and heightened concern about a double dip recession and even deflation operate as a drag on investment activity, notwithstanding historically low interest rates.”