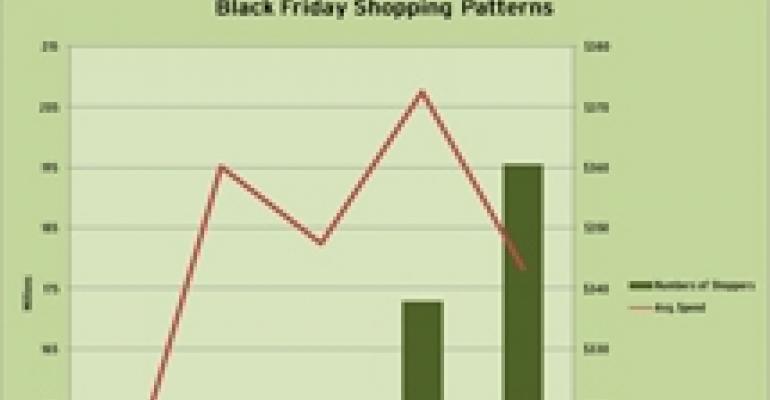 Shoppers flooded malls over Black Friday weekend in huge numbers, but, not surprisingly, they spent less money than in years past, according to the results of a survey conducted for the National Retail Federation by BIGresearch.

According to the survey, 52.1 percent of respondents said they planned to shop during the four-day weekend beginning on Thanksgiving. That was up from 48.3 percent who answered yes in 2008. Of those that said yes this year, 15.1 percent shopped Thursday, 65.6 percent shopped Friday, 53.4 percent shopped Saturday and 28.8 percent shopped on Sunday. BIGResearch extrapolated these results to conclude that more than 195 million shopping trips occurred during the weekend, which includes some consumers shopping on multiple days. The number is an increase from previous years. Using the same methodology, BIGResearch estimates there were about 173 million shopping trips in 2008, 147 million in 2007, 141 million in 2006 and 145 million in 2005.

“Shoppers proved this weekend that they were willing to open their wallets for a bargain, heading out to take advantage of great deals on less expensive items like toys, small appliances and winter clothes,” said NRF President and CEO Tracy Mullin, in a statement. “While retailers are encouraged by the number of Americans who shopped over Black Friday weekend, they know they have their work cut out for them to keep people coming back through Christmas. Shoppers can continue to expect retailers to focus on low prices and bargains through the end of December.”

The numbers jibe with results from an ICSC-Goldman Sachs Consumer Holiday Spending Survey. It found that 16 percent of shoppers planned to start their holiday shopping this weekend. That's the highest number since ICSC began the survey in 2005. ICSC will report same-store sales results that include Black Friday weekend later this week.