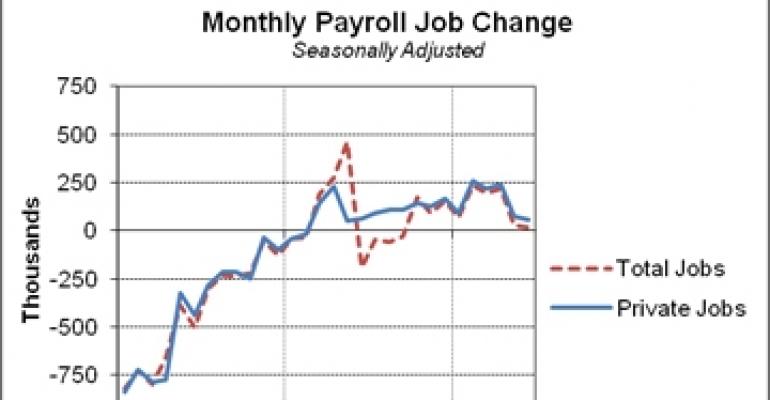 To say that the June jobs report released by the U.S. Department of Labor last Friday fell short of expectations would be a gross understatement. After all, the consensus among economists heading into late last week was that the economy had added 125,000 nonfarm payroll jobs in June. The actual number, however, came in at 18,000.

Meanwhile, the national unemployment rate ticked up from 9.1% in May to 9.2% in June. Perhaps even more troubling is that the change in total nonfarm payroll employment for April was revised downward from a gain of 232,000 to 217,000. Likewise, the figure for May was lowered from a gain of 54,000 to 25,000.

“Watching CNBC, as I usually do on ‘Jobs Friday,’ was painful,” wrote Bob Bach, chief economist for brokerage firm Grubb & Ellis, in his Good News Friday report, the title of which sounded out of tune with the dismal data. “There were audible gasps from the assembled panel of economic luminaries when the 8:30 a.m. announcement from the Bureau of Labor Statistics revealed a shockingly low 18,000 net new payroll jobs created last month.”

Among the report’s highlights and lowlights:

• The gain of 57,000 jobs in the private sector was partially offset by a loss of 39,000 public sector jobs. Employment in both state and local government continued to trend down over the month and has been falling since the second half of 2008.

Continue reading the piece at NREIOnline.com.