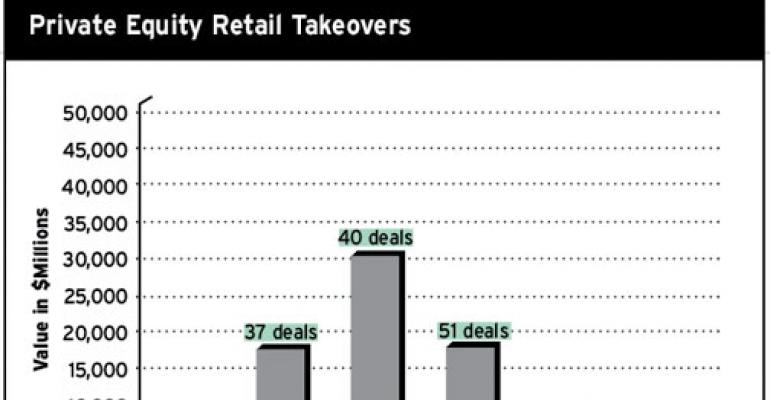 In the heady days of the boom, private equity takeovers of retailers became a regular occurrence. Between 2006 and 2007, there were 91 leveraged buyouts of retailers in the U.S., totaling more than $48 billion, according to Dealogic. But the credit crunch and deep recession have taken their toll—as have some notable implosions of high profile private equity buyouts. By contrast, in 2008, there were 24 buyouts totaling less than $1.2 billion and year-to-date just 10 deals have occurred.

The good news is that there appear to be some outperformers among the round of deals that occurred during the boom, including Dollar General, J. Crew and Toys ‘R' Us. On the flip side, Linens 'n Things, Fortunoff, Mervyns are now defunct following a series of painful liquidations.

The reason for the slowdown is that private equity firms usually amass vast portfolios of firms in different sectors because their whole business model is based on risk. In order to win multibillion-dollar bids they secure short-term acquisition loans that can account for anywhere from 40 percent to 90 percent of the acquisition price. The higher the leverage level, the more acquisition power the firm has.

The financing is usually secured by the assets of the acquired firm and is meant to be replaced by permanent loans a few months down the road. The new owners then attempt to capitalize on their holding companies by either cutting operating costs, or improving profit margins for the underlying business; in some cases, both. Once the turnaround is completed, in two or three years' time, the company is returned to the public market through an IPO, generating additional profits for the private equity players.

The risk attached to this sort of play has to do with the financing model, which backs acquisition loans with low investment grade bonds and features high-interest payments that can destroy the acquired firm if the turnaround strategy is not successful. Moreover, with sky-high debt-to-equity ratios, leveraged buyouts can turn disastrous if private equity players can't refinance their loans. That problem materialized in August of 2007, when the credit crisis first hit the U.S. and it continues to be a pressing concern. According to Standard & Poor's, between 2010 and 2014, more than $476 billion in LBO loans will reach maturity.