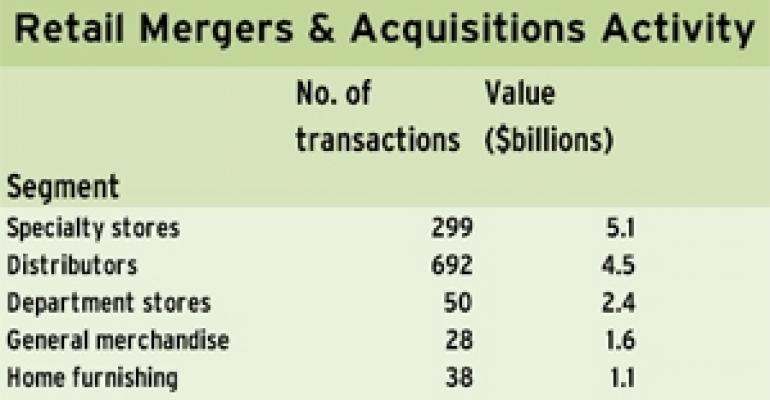 Retail M&A Volume Down Globally From 2009

The United Kingdom has been the most active country in the past 12 months with deal volume amounting to $3.9 billion in 161 transactions. The United States is second with transaction volume of just more than $3 billion in 370 deals. South Korea, France and China round out the top five markets.

In addition, there will be continued activity among online retailers. Online retail amounts to 2.5 percent of total global retail sales, according to IMAP, which expects that figure to continue to increase.

“The recent economic recession has caused consumers to change their buying habits,” IMAP Retail Industry Group Chairman Marc Gillespie said in a statement in conjunction with the report’s release. “They now collect information about features, prices, warranties, availability and environmental impact, and then compare all of these with competitor prices before making a purchase. As the market matures, targeting the right customer is crucial, which is why many retailers are using social media as a marketing tool, offering international options and adopting multi-format strategies such as online stores, catalogs, and mobile and convenience stores.”