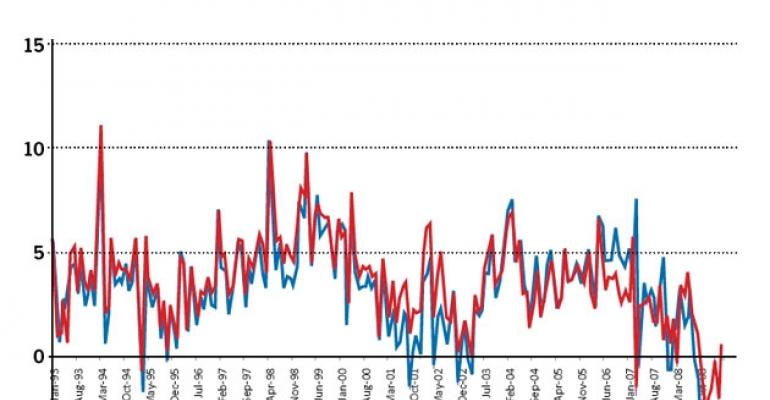 May marked the first month that retailers reported same-store sales since Wal-Mart opted to stop reporting monthly numbers. Wal-Mart in recent years has often outperformed the competition and its weight in the index is such that a good or bad month by Wal-Mart could sway the overall retail figure much higher or lower than it would have been otherwise. As such, it shouldn't be a big surprise that without Wal-Mart's strong sales in the current climate, the May figures looked pretty bad.

To account for Wal-Mart's exclusion, ICSC has furnished a table detailing the industry's results sans Wal-Mart. Dating back to 1993, in most months the figure is more or less the same with or without Wal-Mart. The spread in the figure is larger, however, in both the 2000-2001 recession and even more so in the current downturn. In both cases, Wal-Mart’s success helped propped up the overall figures much higher than it would have been otherwise. On the flip side, at the tail end of the boom, Wal-Mart seems to have dragged down the overall figure. Throughout 2007, the same-store sales numbers would have looked better without Wal-Mart’s inclusion.