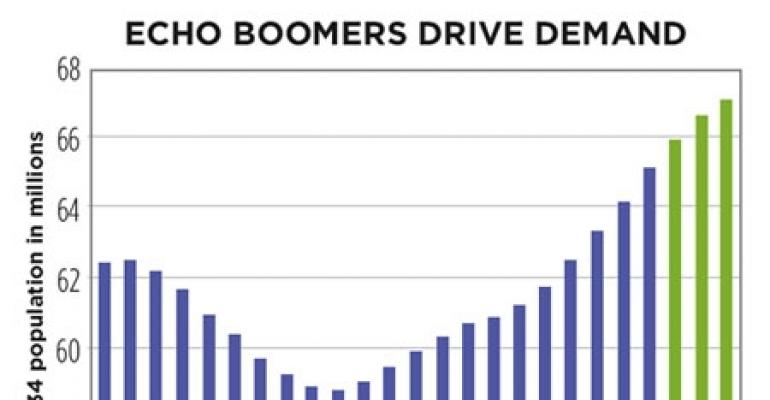 The Allure of Apartments

Apartment fundamentals have improved significantly and are outpacing the recovery of other property types. After peaking at 8.0 percent in the first quarter of 2010, the national apartment vacancy rate declined 240 basis points to 5.6 percent as of the third quarter of 2011, according to Reis.

In addition to positive net absorption, an improving job market and favorable demographics have supported a sharp rise in apartment rents. Reis reported that effective rents increased by 2.3 percent in 2010, and we expect rent growth to accelerate through 2013 as demand remains strong and construction remains below its historical long-term average.

As a result of the quick recovery of apartment fundamentals, interest in purchasing core assets has driven up the pricing of class-A apartments in primary markets to near pre-crisis levels in both cap rates and price per unit. As of the second quarter of 2011, the average transaction cap rate, including all asset classes, declined by about 20 basis points to 6.6 percent, while average cap rates for class-A apartments in primary markets declined to 4.7 percent, according to Witten Advisors.

The apartment sector’s robust recovery is supported by favorable demographic trends (echo boomers), declining homeownership, a limited supply pipeline, and attractive government-sponsored entity (GSE) financing. Based on these demand drivers, we believe the apartment market will likely experience a continuation of improvement in vacancy and rent growth over the next three to four years.

Household formation dropped to approximately 500,000 per year from 2008 to 2010, well below the long-term average of 1.2 million. Much of this decline was driven by young people doubling-up during the recession. Approximately three million young adults, aged between 20 to 34 years old, were living with their families during the past five years.

As job growth began to materialize for this age cohort in 2010, their pent-up demand for apartments returned to the market in 2010 and 2011. We expect this growing population, an expected 1.9 million additional echo boomers from 2012 to 2014, and their continued job recovery will likely support long-term demand for multifamily housing as the economy recovers.

In addition to released pent-up demand, the shift in preference from homeownership to rental is generating additional demand for apartment units. The homeownership rate has fallen from 69.0 percent in the third quarter of 2006 to 66.1 percent in the third quarter of 2011, which translates to approximately 2.7 million potential new household renters. The increased rate of foreclosures has also impacted the rate of homeownership and we expect it will continue to do so in the near-term. Roughly 2.8 million homes have been foreclosed since 2008, with another five million expected to enter foreclosure process by the banks by the end of 2012.

Despite home affordability currently reaching an all-time high, many potential buyers are choosing to rent for now because of declining U.S. home values as well as the difficulty in qualifying for a mortgage, which makes it harder to buy homes. We expect housing prices will likely remain weak for the foreseeable future.

The GSEs—Fannie Mae, Freddie Mac and HUD—continue to provide attractive apartment financing terms and rates: Loan-to-value ratios are currently 70 percent to 75 percent and 190 to 220 basis points over Treasuries. In addition, an increasing number of balance sheet lenders are being forced to compete to lend aggressively.

With compressed apartment cap rates, improved development financing, and lower construction costs (estimated to have declined 10 percent to 25 percent from the peak), we expect excellent development opportunities in many markets over the next few years.

Given a favorable financing environment and strong demand, development activities could accelerate in 2013 to 2014 as the market strengthens, presenting the risk of limited rent growth or oversupply. However, in most major markets across the U.S., we expect demand to keep pace with new supply even as construction increases because of the trends previously discussed.

Historically, the apartment sector exhibited the highest average total return and the second best risk-adjusted return among the five property sectors. It currently is experiencing a robust recovery supported by favorable demographic trends (echo boomers), declining homeownership, a limited supply pipeline and attractive GSE financing. Due to these short and long-term trends, apartments are currently an attractive asset class for investors and will likely remain so for the next several years.