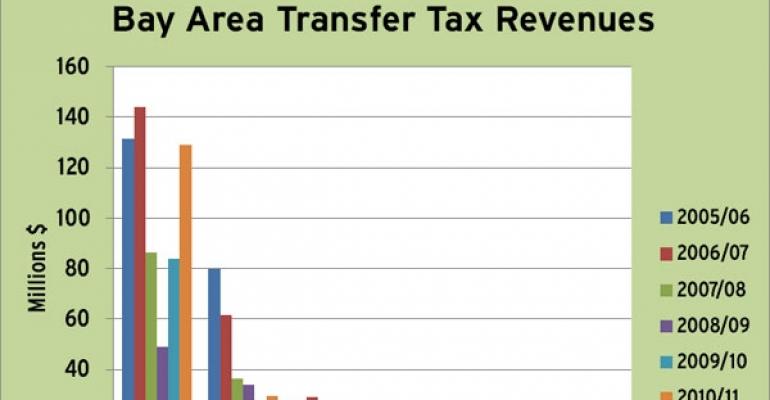 Property owners in and around San Francisco face an increasing tax burden as local governments attempt to bolster their struggling budgets by expanding the scope of transfer tax laws.

In recent years, the cities of San Francisco and Oakland as well as Santa Clara County have gone beyond just collecting transfer tax when a deed is recorded, and now collect the tax for real property ownership changes that occur when one company buys or takes over another. The new laws may be working, as transfer tax revenues in all three jurisdictions have recently risen.

From the time of its first implementation in the 1960s until recently, local governments only levied documentary or real property transfer taxes when a deed or other legal instrument was recorded based upon a transfer of “realty sold.” The amount usually ranged from $0.55 cents to $3 for each $1,000 increment in the reported price paid for the property.

However, the advent of new types of legal entities which are readily bought and sold has altered the way properties transfer now. As a result, the traditional system for collecting transfer tax via recorded deeds cannot always keep up with today’s transactions.

For example, owners frequently transfer single-member limited liability companies and limited partnership interests to other owners. When these legal entities own real property, tracking real estate transfers can be difficult: While a deed is recorded when Company A sells real estate to Company B, no deed recording occurs when Company A buys a controlling interest in Company B, which owns real estate and continues to operate. Because the change in control of a legal entity that owns real property does not require a deed to be recorded, transfer tax is not collected when such legal entity transfers occur. Until now, that is.

Santa Clara County was the first Bay Area jurisdiction to enact a transfer tax on legal entity transfers. The county’s law imposes transfer tax whenever a legal entity that holds real property experiences a change in control, either directly or indirectly.

San Francisco adopted an easier approach. It simply redefined the term “realty sold” in the 1960s transfer tax statute to mean a change in ownership control for a legal entity that holds real property. Oakland followed suit, amending its law to include language similar to that in San Francisco’s ordinance.

The amendments to these three Bay Area jurisdictions’ laws were intended, at least in part, to close a perceived loophole in the transfer tax and thereby increase the amount of tax collected. For instance, when Oakland amended its transfer tax law, it expected to increase transfer tax revenues by $550,000 each year.

The strategy may be working. In the past one to two years, the amount of transfer tax collected by San Francisco, Oakland and Santa Clara County has been on the rise. By far, the largest rise was in San Francisco where collections have shot up by more than 160 percent over the past two years, while Oakland and Santa Clara County experienced modest gains in transfer tax revenues.

Cris K. O’Neall specializes in property and local tax matters as a partner in the Los Angeles law firm of Cahill, Davis & O’Neall LLP. His firm is the California member of American Property Tax Counsel, the national affiliation of property tax attorneys.