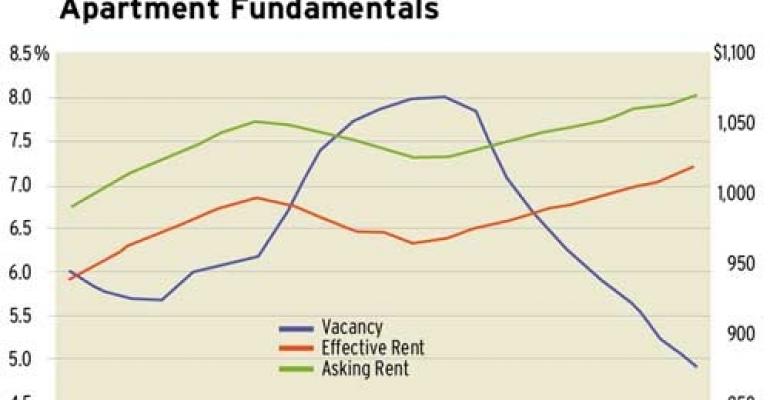 A Coming Deluge of Apartment Construction

Apartment fundamentals are performing at robust levels, with vacancies cratering to levels unseen in more than a decade. With few other real estate sectors offering such promising returns, developers are planning to open hundreds of thousands of new rental units in the next few years. Will the growth in new supply arrest improvements in occupancy and rents?

First quarter figures for 2012 are no less impressive than the arc of recovery that apartment properties have followed over the last two years. National vacancies dropped to 4.9 percent, the lowest level since late 2001. This is only the third time in more than 30 years of Reis history that national apartment vacancies have dipped below 5 percent.

More than 36,000 units leased up from January to March. Effective rent growth tends to spike as landlords perceive that tight market conditions allow for greater pricing power, and it is typically at levels below 5 percent that a pullback in concessions accelerates. Sure enough, effective rents grew by 0.9 percent in the first quarter, the fastest pace of increase since end-2007.

Supply growth remained tight, with only 7,342 units coming online. This is the lowest quarterly figure for new completions since Reis began publishing quarterly data in 1999. Demand for rentals has remained strong, with households continuing to flock to rentals, given the continuing moribund state of for-sale single-family home prices.

Risks in the near future

With few other sectors in real estate performing as well as multifamily, developers are rushing to bring hundreds of thousands of new units to market over the next few years. Figures from the 2010 U.S. Census suggest that any increase in housing starts is primarily driven by multifamily construction, which grew by an annual rate of 21 percent last February, even as construction of single-family homes fell by 9.9 percent.

There are indications that anywhere from 150,000 to 200,000 units under construction in the top 79 markets that Reis tracks, with approximate completion dates from late 2012 to 2013. That is more than triple the rate of inventory growth in 2011.

There is much uncertainty, however, as to whether construction delays or relatively tight financing will imply a more measured pace for supply additions. Developers tend to be optimistic about completion dates, but often miss targets, particularly if deadlines are more than a year off. Still, there are some metros that lenders and investors will want to monitor closely, given near-term projections for new construction. Analysts will want to examine both the absolute change in inventory – the number of units projected to come online – as well as supply growth relative to long-term annual averages. Four MSAs stand out for both absolute and relative measures of risk in supply growth

The distinction between absolute and relative supply growth is key. There are also tens of thousands of apartment units planned for Dallas and Houston in 2012 and 2013, but the implied changes in inventory for these two areas are well within long-term historical ranges. Measures of supply growth risk for Seattle, Austin, suburban Maryland and Washington, D.C. rank high whether expressed in terms of absolute supply growth or increases relative to long-term averages. A recent article in Bloomberg Businessweek profiled risks of overbuilding for various areas around the country, highlighting these four metros as well using data from brokerages and developers that complemented Reis findings.

With supply growth expected to be at its most robust in places like Seattle in at least two decades, should we fear a return of a contractionary cycle for apartment rents and occupancies?

Increased supply growth is a necessary but not sufficient condition for a severe pullback in apartment fundamentals. If demand for rentals remains high or rises even further, improvements in occupancies and rent growth can be sustained. Texas markets are betting on benefits from a resurgent energy sector, buoyed by high oil prices. Seattle-based employers like Amazon are continuing to hire more people and lease up new commercial space. As economic growth quickens, a recovering labor market may prop up demand for rentals.

It is, however, prudent for market participants to examine specific submarkets that may be at greater risk, given this ever-shifting balance of supply and demand. While this kind of supply growth need not push apartment fundamentals back into contractionary territory, it is important for individual investors to consider how greater competition in specific submarkets caused by the proliferation of apartment rentals will impact their portfolio’s performance. Reis projects that vacancies will hover below 5 percent for the next few years, but rent growth will peak in 2012. That does not mean rent growth in subsequent years will be negative, but expectations, given the absence of tight supply conditions, do need to be tempered.