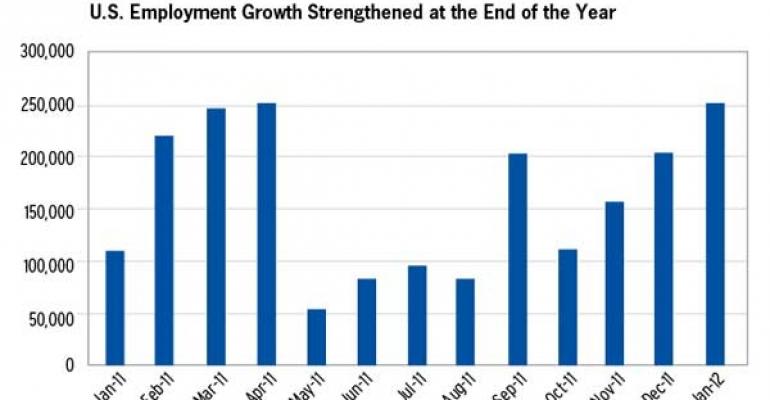 A Positive Start to 2012, But Caution Remains

The U.S. economy expanded less than forecast in the fourth quarter as consumers curbed spending and government agencies cut back. Real GDP climbed 2.8 percent on an annual rate, up from 1.8 percent in the third quarter. Consumer spending, which accounts for approximately 70 percent of the economy, increased by 2.0 percent, a very small change from the 1.7 percent gain in the three months prior. Business investment remained a bright spot. Corporate spending on equipment and software rose 5.2 percent for the year. Orders for durable goods like computers and machinery increased more than forecast in December, indicating good momentum going into 2012. We believe that the ongoing European debt crisis is still the biggest risk to global economic growth. The U.S. economic recovery is also still vulnerable to external shocks and several uncertainties remain a risk.

After a hiring slump in the summer of 2011, private employers increased hiring during the fourth quarter. Non-farm payrolls increased by 203,000 workers in December and an additional 243,000 in January, bringing the unemployment rate down to 8.3 percent. However, if discouraged job seekers were included, the unemployment rate would have been 9.1 percent. During 2011, non-farm payroll employment increased 1.6 million with the private sector gaining 1.9 million, while government employment shed 280,000 jobs. U.S. corporations continued their solid growth during the fourth quarter, with profits rising by approximately 8 percent year-over-year. Overall, with $2 trillion cash on their balance sheets, private businesses are well positioned for expansion, investment, and ultimately, employment growth.

The 2011 holiday sales rose a modest 3.8 percent year-over-year growth, compared to 5.8 percent year-over-year increase in 2010. With anemic income growth, American consumers dipped into savings to finance their purchases. Personal savings rates decreased to 3.7 percent, the lowest level since 2007, from 3.9 percent in the third quarter of 2011. People saved less money because they earned little interest in today’s ultra low yield environment. Nonetheless, moderate job growth and further declines in home prices may continue to weigh on consumer spending going forward. Meanwhile, the cost of living in the U.S. was unchanged in December, primarily due to declines in gasoline prices. Without food and energy, the core Consumer Price Index (CPI) increased by only 0.1 percent, the smallest increase since March. Over the past 12 months, the CPI index increased by 3.0 percent, while core CPI rose 2.2 percent.

The struggling housing market shows no sign of reaching a bottom. The S&P Case Shiller Home Price Index fell by 3.7 percent in November, larger than expected, suggesting that distressed properties are hampering the improvement in the market. According to the National Association of Realtors, both single family starts and new and existing home sales remained at depressed levels, although home-building activities picked up during the fourth quarter. Discouraged by stringent lending standards and still declining housing prices, many would-be buyers chose to rent. As a result, the homeownership rate declined to 66 percent during the fourth quarter of 2011. Despite record low mortgage rates and historically high affordability, we do not expect a meaningful recovery in the housing market over the next 12 months.

The worsening European debt crisis in late November sent another fear wave across the globe with spreads of government bonds in Greece, Portugal, Spain and Italy widening significantly. Although the credit markets have regained some confidence (with the exception of Greece and Portugal), the European Union has complex cross-border issues to resolve and the debt crisis seems far from over. Driven by a flight to safety, investors bought more U.S. Treasury bonds, keeping 10-year treasury yields below 2.0 percent during most of the fourth quarter. In November, the congressional “Super Committee” failed to reach an agreement to identify federal spending cuts of at least $1.5 trillion over the next 10 years. That impasse has triggered an automatic $1.2 trillion in spending cuts, including $600 billion in defense spending, starting in January 2013, posing another uncertainty for the marketplace. To boost confidence in the market, the Federal Reserve recently announced that benchmark interest rates will stay low until late 2014, and additional monetary stimulus is possible.

Negatively impacted by rising market volatility, investors became more risk averse, with risk spreads for non-Treasury assets widening significantly since the third quarter last year. Spreads of AAA CMBS over swaps have increased by over 250 basis points since mid-August, temporarily shutting down the CMBS securitization market, according to the Commercial Mortgage Alert. New CMBS issuance totaled $32 billion in 2011, still a fraction of the peak in 2007. Commercial real estate markets remained bifurcated. Transactions for non-strategic assets in secondary and tertiary markets significantly slowed as some investors hesitated and lenders retreated. Nonetheless, class-A assets in primary markets are still, by and large, obtaining attractive financing from a wide range of lenders, including life insurers, commercial banks and foreign institutions.

Commercial real estate fundamentals continued on their recovery path, although general leasing activity slowed moderately during the fourth quarter of 2011. Private core real estate returns have been compressed over the past year, but remain relatively attractive compared to Treasury bonds, corporate bonds and REITs. With improving fundamentals, we expect more capital to flow into the commercial real estate market. The NCREIF Property Index (NPI) reported a strong total return of 3 percent for the fourth quarter. For the year 2011, NPI achieved 14.3 percent total return, significantly outperforming the S&P 500 of 2.1 percent and the NAREIT Equity REIT Index of 8.3 percent.

According to Real Capital Analytics, national transaction volume across the five major property sectors totaled $61.6 billion in the fourth quarter of 2011, 14.1 percent higher than the third quarter and 10.4 percent higher than the same period one year prior. Transaction volume increased year-over-year noticeably in the apartment, office and retail sectors. The average transaction cap rate for all properties over $2.5 million declined to 7.0 percent during the fourth quarter of 2011, 30 basis points lower than the same period one year ago.