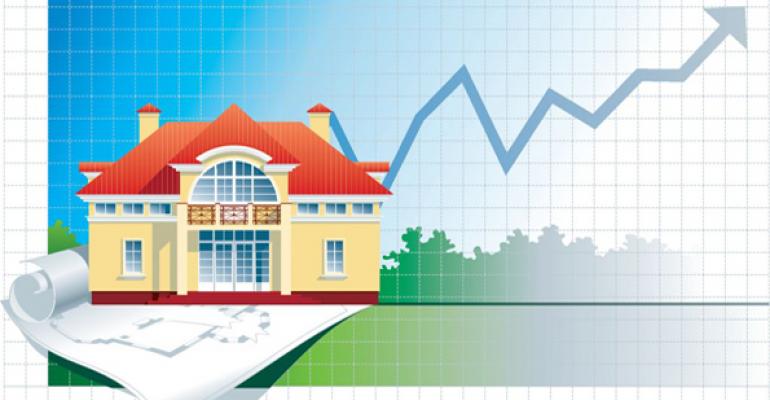 Should Apartment Landlords Worry About an Improving Housing Market?

In last month’s column, we argued that the strong multifamily market will continue on despite the flood of new supply in the coming years. This month, we tackle another source of concern for landlords and apartment investors. Could further improvements in the housing market dent the current upswing in the apartment market?

Home prices and sales have recently passed what many believe to be their cyclical trough, coinciding with a slowdown in demand for apartments that was visible in third quarter data. The timing of both these occurrences suggests that an upturn in the single-family housing market may be contributing to slowing improvements in multifamily fundamentals.

Housing market data releases have been uniformly positive in recent months. Home prices, as represented by the S&P/Case Shiller Composite 20 Index, having been increasing on a month-to-month basis for six straight months. More importantly, year-over-year price growth turned positive during the summer and his been increasing in each month since then.

While we may see some month-over-month declines in prices in the next few releases, this is mainly due to seasonality. Given that the popular home buying seasons have come to an end, distressed sales will make up a bigger share of transactions, putting downward pressure on prices. This, however, will just be temporary. For a better indicator of price movements, we will look to year-over-year changes in the S&P/Case Shiller Composite 20 Index, which should continue to exhibit somewhat healthy increases.

While the single-family housing market finally appears to be on the mend, this does not automatically mean less demand for the multifamily sector. Jay Lybik, vice president for market research at Equity Residential, a Chicago-based REIT, tracks move-outs closely and has witnessed little to no change in the number of residents leaving to buy a home.

Data from the National Association of Realtors also shows the percent of sales accounted for by first-time home buyers is flat after spiking due to the Home Buyer Tax Credit, which expired in 2010. Single-family homes that are being purchased by investors for rent cater to different household types than investment-grade multifamily properties. Single-family rentals see households with children as their largest household type compared to investment-grade multifamily properties in which singles dominate, especially in urban locations.

And while all of the recent housing data releases have been quite promising, we must remind ourselves that all of these data points are recovering from a very low base.

Even though some housing figures are increasing at double-digit year-over-year rates, they are rebounding from historic lows. The housing market is not firing on all cylinders. Families are still burdened by underwater mortgages and heightened levels of foreclosures will continue for the foreseeable future. Yes, the market is certainly improving as of late. But then again, when coming out of a historic housing market meltdown, it does not take much to exhibit improvement.

Another reason for continued optimism for apartments in the face of an improving housing market is the increasing popularity of urban living. The post-war era in America saw a great migration out of cities and into the suburbs. Suburban expansion brought with it an explosion in demand for home ownership. The suburbs provided the parents of the baby boom generation relatively clean, quiet and crime-free towns to raise their kids. The proliferation of automobiles made suburban living a viable option.

However, recent trends suggest a reverse migration away from the suburbs back to the cities. There are several explanations for why the trend has reversed. Urban areas are no longer the hotbed for crime they once were. The surge in gasoline prices over the past decade has made automobiles a less popular mode of transportation, with many now favoring the public transportation provided in cities.

Urban areas also offer higher pay and wage growth. Following a decade or more of stagnant wages, that is a mighty strong incentive for people to move into or closer to cities. While this trend won’t push the apartment demand needle much higher in any one quarter, it is a powerful tailwind for the sector that should not be ignored.

In fact, it is notoriously difficult to trace a direct correlation between single-family home prices and demand for multifamily rentals. Fundamentals have more to do with supply and demand trends within each property type then any interaction between them. This is why the forthcoming increase in multifamily supply is the bigger worry for most. Still, we believe the multifamily sector will do just fine in the coming years despite both a wave of new supply and a revived housing market.