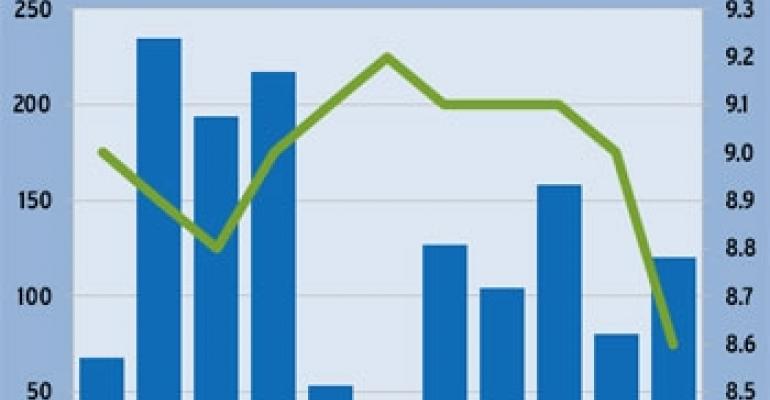 The State of the Investment Environment

The U.S. economy grew in the third quarter at the fastest pace since 2010 with real GDP expanding at a 2.0 percent annual rate, up from 1.3 percent in the second quarter. Household purchases, the biggest part of the economy, increased by 2.4 percent, much stronger than forecast.

In addition, business investment remained robust. Corporate spending on equipment and software climbed 17.4 percent, the most in a year, contributing 1.2 percent to economic growth. This economic growth, along with hope for a possible resolution of the European debt crisis, has eased some concerns of a double-dip recession in the near term. Nonetheless, the economic recovery is still vulnerable to external shocks and several uncertainties remain a risk.

After a hiring slump in May and June, employers have since increased payrolls by an average of 132,000 workers per month, including 120,000 workers added in November. Job gains occurred mainly in retail trade, business and professional services, leisure and hospitality, and health care, while government employment continued to trend downward. After little change in the unemployment rate since April, the jobless rate declined to 8.6 percent in November, its lowest point since March 2009, as a result of job gains and a decrease in the labor force.

Driven by both revenue growth and cost-containment, corporations reported a solid third quarter, with profit growth rising by 11.6 percent year-over-year. Overall, with $2 trillion cash on their balance sheets, U.S. businesses are considered to be positioned for expansion, investment, and ultimately, employment growth.

Despite stagnant income growth over the past several months, consumer spending has remained strong as households have dipped into their savings. The personal saving rate was 3.5 percent in October, up 20 basis points from September, but it remained at one of the lowest levels since December 2007. Americans generally saved less money and earned little interest in today’s ultra low yield environment. A drop in real incomes in September, along with declines in home prices and low consumer confidence, cast doubt on whether this increase in spending can be sustained without meaningful job growth.

However, the most recent monthly data suggest the economy is gradually improving, with incomes rising by the most in seven months during October. Retailers reported a strong start to the holiday shopping season over Thanksgiving weekend, with sales during the four-day weekend rising 8.7 percent from a year earlier, according to MasterCard Advisors’ SpendingPulse.

In November, consumer confidence rose to its highest point since July, however it remains 10 percent below one year prior. While consumer confidence continues its monthly improvement, it remains vulnerable to outside political or economic setbacks, according to the Thomson Reuters/University of Michigan Survey of Consumers.

Meanwhile, the cost of living in the United States has trended up throughout 2011, primarily due to rising food and gasoline costs. The Consumer Price Index (CPI) declined in October by 0.1 percent over the previous month as a result of lower energy prices recently, however was up 3.5 percent on a year-over-year basis. Without food and energy, core CPI increased by only 0.1 percent, equal to the increase in September and remains the smallest increase since March.

The U.S. housing market continues to struggle, despite record low mortgage rates and historically high affordability. Unlike in the past recoveries, the housing sector has not contributed to either real GDP growth or job creation in this recovery.

Both single family starts and new and existing home sales remain at depressed levels. According to the National Association of Realtors, September experienced the biggest monthly decline in pending home sales since April. Pending home sales in October then increased 10.4 percent over September, the largest monthly gain in 2011. Yet, with an anemic job market and rising foreclosure sales, we do not expect a meaningful recovery in the housing market over the next 12 months.

The S&P downgrade of U.S. debt in August and a worsening European sovereign debt crisis in August and September initiated a drop in confidence globally. As a result, equity markets plummeted worldwide, nearly into bear market territory in August and September, before recovering in October. Driven by a flight to safety, investors bought more U.S. Treasury Bills, and 10-year treasury yields plunged from 2.8 percent in early August to a record low of 1.7 percent in mid-September.

To provide additional monetary stimulus, the Federal Reserve launched “Operation Twist”—using maturing short-term treasuries ($400 billion) on its balance sheet to purchase longer-term treasuries through June 2012. Its intent is to thereby push down interest rates on everything from mortgages to business loans, giving consumers and companies an additional incentive to borrow and spend money. However, an impasse of the recently established congressional “Super Committee” has now triggered an automatic $1.2 trillion in spending cuts (including $600 billion in defense spending) starting January 2013, posing another uncertainty for the marketplace.

In response to European debt crisis, six central banks, including the Federal Reserve, recently announced a coordinated effort to provide access to U.S. dollars for commercial banks through temporary U.S. dollar liquidity swap arrangements. In effect, the arrangement will lower the cost of obtaining dollars by half a percent through January 2013. Though this does not provide a solution to the debt crisis, it helps to ease stress for European commercial banks in the short term.

Negatively impacted by rising market volatility, investors became more risk averse, with risk spreads for non-treasury assets widening significantly during the third quarter. Spreads of AAA CMBS over swaps have increased by over 200 bps since mid-August, prompting investment banks to withdraw several large new issuances, at least temporarily, according to Commercial Mortgage Alert. While transactions for non-strategic assets in secondary and tertiary markets slowed significantly as some investors hesitated and lenders retreated, class-A assets in primary markets still by and large have been obtaining attractive financing from a range of lenders including life insurers, commercial banks, and foreign institutions.

Commercial real estate fundamentals have generally continued their recovery path, although leasing activity slowed moderately during the third quarter of 2011. Private core real estate returns have been compressed over the past year. With improving fundamentals, we expect that more may capital flow into the commercial real estate market. The NCREIF Property Index (NPI) reported a total return of 3.3 percent for the third quarter of 2011; whereas the S&P 500 and the NAREIT Equity REIT Index returned -13.9 percent and -15.1 percent, respectively.

National transaction volume across the five major property sectors totaled $45.4 billion in the third quarter of 2011, 15.3 percent lower than the second quarter but still 38.0 percent higher than the same period one year prior, according to Real Capital Analytics. The firm also reported the average transaction cap rate for all properties over $5.0 million remained unchanged at 7.1 percent during the third quarter of 2011, 10 basis points lower than the same period one year ago.

Looking forward, we think that U.S. economic fundamentals are improving although we are still vulnerable to exogenous shocks from overseas. GDP growth in the fourth quarter could accelerate to 2.5 percent, creating a healthy momentum into 2012.