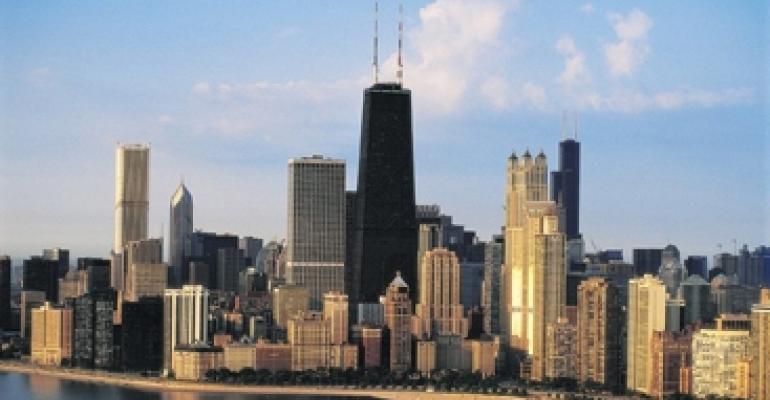 New deals are buoying the Chicago office market and are expected to spur construction of fresh, long-term projects. There are also signs of a turnaround in leasing, which would mark an improvement in the double-digit vacancy rate.

The mega-merger of United Airlines and Continental Airlines was approved on Sept. 17, and the new, consolidated company headquarters will be near United’s existing base in Chicago’s downtown, promising more jobs and office demand.

Although there is currently no new construction under way downtown, the market could soon be ready to support another high-rise. “The trophy buildings are all pretty well leased in Chicago, and it won’t be long before another new building gets launched,” says Todd Lippman, vice chairman of CB Richard Ellis Group.

A new high-rise could be built by late 2013, when a number of leases will expire in the Loop, says Lippman. He estimates the market would support up to an 800,000 sq. ft., 40-story high-rise.

“Anything bigger than that you couldn’t get financed. Any new building would have to be at least 50% pre-leased, which is going to be the biggest challenge.”

Chicago lost its bid for the 2016 Summer Olympics, and the 23-acre project by Fogelson Properties formerly was intended for the Olympics. The still-planned development would include 3,000 hotel rooms plus residential units and retail space, but would be anchored by an office tower of 70 stories with 1.5 million sq. ft. The Fogelson project is expected to take a decade or more to come to fruition.

There are hints of improving office fundamentals in downtown Chicago, known to locals as the Loop. It houses 137 million sq. ft. of offices, compared with more than 96 million sq. ft. in the suburbs. Positive space absorption occurred downtown in the second quarter for the first time in two years.

Sublease space has dropped by 20% since the end of last year to just 3.4 million sq. ft. That is the lowest sublease total since the end of 2008. The direct vacancy rate in the 30 newest downtown towers — those considered most likely to be coveted by buyers — stands at 11.5%, down from 12.2% earlier this year, according to MB Real Estate Index. Older buildings may take longer to recover occupancy.

The suburbs saw the biggest deal in years when Navistar Inc., the maker of trucks and engines, announced that it was moving its headquarters from west suburban Warrenville to nearby Lisle, where it will occupy the former Alcatel-Lucent office complex. Navistar acquired the 85-acre campus, which includes 1.2 million sq. ft. of offices, for just $34 million, but is spending another $75 million to update and expand the facilities. The move involves the retention and creation of about 3,000 jobs.

All this activity has suddenly awakened the once moribund market. “There are a lot of investment funds looking at Chicago right now,” declares John Przybyla, a vice president and regional manager of the local Marcus & Millichap Real Estate Investment Services office.

“If we can get some job growth here again soon and rents started to stabilize, both of which are being predicted for 2011, then office transactions will really start to increase around Chicago.”