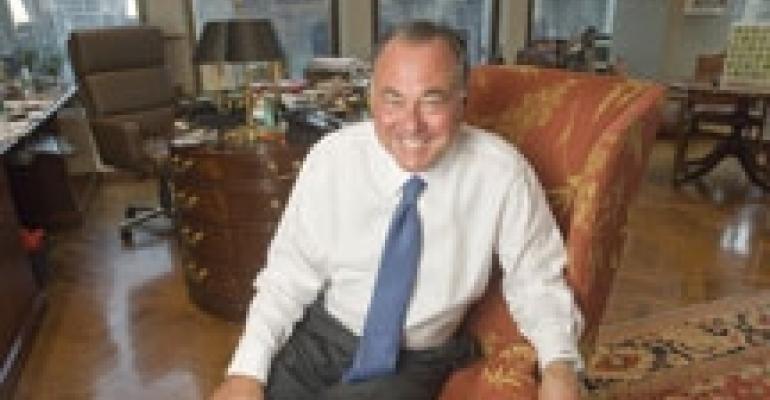 Financial Crisis Is ‘Different Than Anything I’ve Ever Seen Before’

Experience, especially in troubled times, often counts for a lot. Stephen Siegel, chairman of global brokerage for CB Richard Ellis in New York, is a 40-year veteran of the brokerage business and a virtual institution in New York commercial real estate circles.

Siegel knows New York and its financial markets like the back of his hand. In 2006, Siegel negotiated Gucci Group's lease at Trump Tower in Manhattan. He also advised Hudson Waterfront Associates, a partnership of several overseas investors, on the acquisition of 1290 Avenue of the Americas for $1.25 billion, and then resold it one year later to Vornado Realty Trust.

Siegel also arranged the $306 million sale of the last developable site within the 42nd Street Development Project, to SJP Properties. SJP is constructing Eleven Times Square, a 1 million sq. ft. office property on the site. NREI recently caught up with Siegel in his Manhattan office to discuss the state of the New York office market amid the financial turmoil that has rocked Wall Street and the investment banking business.

NREI: How does this financial crisis rank with others you’ve seen in your career?

Siegel: This is really different than anything I’ve ever seen before. If somebody told me last September that a year from now there will be no more Bear Stearns, no more Lehman Brothers, effectively no more Merrill Lynch, no more Bank of Scotland, and that perhaps AIG would be in serious trouble, I would have them wait right where they were while I got the guys in the white coats.

It’s different in its order of magnitude. It’s different in true financial terms, in the losses suffered. I think that the U.S. government should have stepped in six months ago or longer, and we might not be where we are right now. Instead of putting the finger in the dyke, the U.S. government perhaps should have anticipated that there was going to be a hole and fixed it first. It wasn’t a secret how highly leveraged everybody was.

We have a better market overall in the United States compared with many other times where we’ve had crises like this because we don’t have any substantial overbuilding anywhere, certainly not here in New York. New sublet space is not competing with substantial new space in new developments. From that standpoint, the impact is going to be a lot less significant in terms of what it does to average rents and concessions. Now someone who wants sublet space is going to have increased numbers of opportunities.

NREI: How are the corporate users you’ve talked to, your clients, reacting?

Right now space users are asking, “Should I wait? Is there going to be a complete decline here in New York in rents?” The answer really is “no”, because even with the space that’s being delivered that we are now aware of, it only adds 1% to 1.5% to the available supply.

It was obviously good news when Barclays Bank took the Lehman headquarters, and hopefully the bank will maintain a substantial amount of the Lehman workforce. We don’t know yet what will happen with Merrill Lynch because we don’t know what Bank of America will do. We know Bank of America is retaining the traders and a bunch of other operations.

Does that free up some space for downtown? Maybe there really isn’t a lot of Class-A space available downtown. The new 7 World Trade Center is nearing completion, the other world trade center buildings continue to be delayed, and there is only a handful of buildings that you could consider Class-A quality downtown and they don’t have large vacancies.

NREI: Has globalization helped to minimize the shocks, or has it made matters worse due to the connectivity?

Siegel: It helps minimize them. I called an investor/owner of some note on his way to the airport, and we were laughing about what was going on in a dark-sense-of-humor way. He was heading home to the West Coast because New York City is so much more financial-service centric than the rest of the country and most of the rest of the world.

The bang is not as serious elsewhere. The only specific portion of our industry that’s been hammered consistently across the board is the investment sales piece. That’s because there’s no liquidity and there’s no financing.

NREI: You’re an eternal optimist, so are there opportunities out there in all of this?

Siegel: Adversity always breeds opportunity. If you look at it carefully, I remember when we had our softest markets in the early 1990s. We trained our people to go in and discuss with tenants early renewals to lock in long term while the market was low. We also talked to landlords about accepting space back from tenants who exited their leases early in order to stabilize the occupancy of their buildings and not worry about how good or bad things were going to get. When the dust settles on this, it will breed some opportunities.

Siegel: Sure, I think as time goes on some of these firms that are having more difficulties will put themselves on the market. GVA Williams was on the market for several years before it found a taker. Others that do not have the market share sufficient to sustain the current heat will have to figure out some other way of surviving. And one of those ways is consolidation.

Siegel: We’ll see a pretty flat year in 2009. I don’t think we’ll see any substantial demise in rents. During the beginning and middle part of the year you might see some of the credit markets coming back. There might be some money available for traditional deals at much higher ratios of equity to debt than we’ve seen in the last three to five years. Cap rates could move higher. The second half of the year will pick up and this momentum will accelerate heading into 2010.