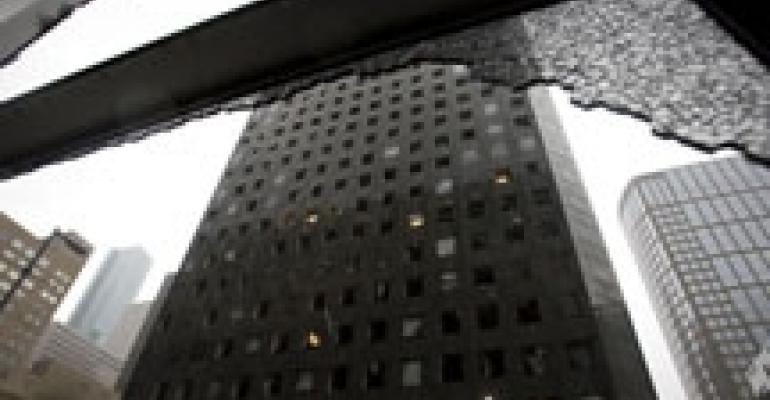 America’s fourth-largest city was on a roll. That is until Ike came to town.

According to CB Richard Ellis, Houston’s overall office market recorded an 11.7% vacancy rate in the second quarter of 2008, compared to a national average of 13.8%. Houston’s unemployment rate stood at only 4.9% in July versus 5.7% nationally, and it added 57,100 new jobs in the past 12 months, according to the Texas Workforce Commission

Then Hurricane Ike rolled through early on the morning of Sept. 14, causing up to $18 billion in damage, making it the third-costliest storm in U.S. history.

One of the hardest hit areas was downtown Houston, where the 75-story JPMorgan Chase Tower, the state’s tallest office building, saw most of the eastern windows from floors one through 40 blown out early Saturday morning at the height of the storm.

According to a spokesman with property manager Hines, the tower was scheduled to be reopened by Friday, Sept. 19.

The carnage prompted national attention, and President Bush toured the Houston/Galveston area on Tuesday of this week. The city remains under a 9 a.m. to 6 p.m. curfew through Friday.

“It was the worst storm I’ve ever seen, and a lot of people share that sentiment,” says Chip Clare, president of the Gulf Coast region for Houston-based Transwestern, the city’s largest commercial property manager with 36 million sq. ft. under management.

Clarke describes the pattern of damage across the city as “indiscriminate.” He estimates that about 30% of Transwestern’s management portfolio was back in operation by Tuesday, but fewer than 50% of those tenants are reporting to work. “Most people have figured out a way to work remotely. They are also resourceful. A guy came into the office today because we had air conditioning and his house didn’t.”

One of the biggest challenges is restoring the city’s water pressure to acceptable levels. “We have to make sure we meet the life safety requirements before we can admit tenants back into the space. A lot of people also have generators, and it’s an issue getting gas to keep those generators running as well.”

As the city restores power and water, office tenants are finding new ways to get to work. “In the short term, we’ve taken pretty significant inventory of spaces we have that are rent-ready, plug-and-play if you will, that people could move into overnight if they needed an office location. And some tenants are taking advantage of that,” says Clarke.

Ike was the fifth major hurricane to strike the Houston area in the past three years, but the market has shown resilience. According to a recent Grubb & Ellis market report, Houston’s office market absorbed nearly 694,000 sq. ft. of space in the first half of 2008. The main worry is an expected 2.3 million sq. ft. of new office space slated to deliver in the second half of 2008.

So far this year, Houston’s investment market has proved popular. According to New York-based Real Capital Analytics, investors have purchased nearly $1 billion of office properties year to date in the Greater Houston area. Office buildings present somewhat of a value today, trading at $163 per sq. ft., far below the national average of $263 per sq. ft.

“The fact that the hurricane went through won’t change the fact that we’ll continue to look there,” says David Steinwedell, executive vice president of AIC Ventures, an Austin-based company that has completed more than $500 million in sale-leaseback deals. “As long as Houston has a viable economy it’s going to be a good investment market. You might have higher insurance costs, but if their economy stays on course, guess what? Money is going to go there to invest.”