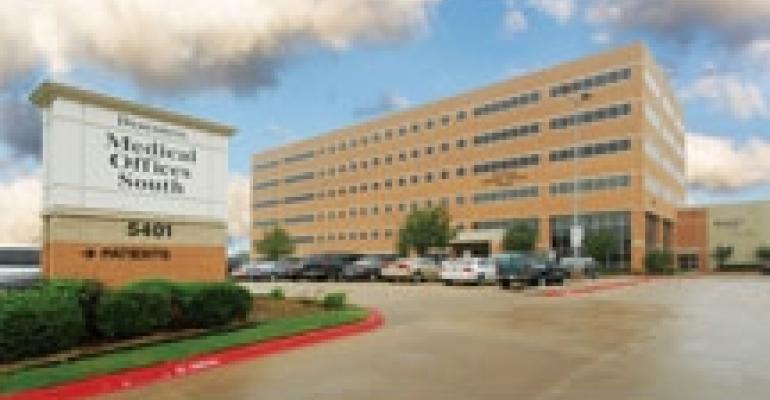 While office building transactions have fallen off a cliff in recent months, one bright spot many industry analysts point to is the medical office building market, where sales typically range from $10 million to $30 million. According to the latest data from Real Capital Analytics, sales of medical office properties totaled $3.3 billion in the first nine months of 2008, a 13% drop compared with the same period a year earlier. But that dip pales in comparison to the 62% dive in property sales for the entire office market in the third quarter.

Many industry watchers consider the sector somewhat “recession proof,” but that assertion has yet to be truly tested. Proponents point to the sector’s strong ties to the healthcare industry, which remains one of the few growing segments of the U.S. economy. According to the National Coalition on Health Care, healthcare spending in the United States reached $2.3 trillion in 2007, and is projected to reach $3 trillion in 2011 and $4.2 trillion by 2016.

“While volume is depressed everywhere, it’s not impacting medical office as much,” says Lee Asher, first vice president of investment properties for CB Richard Ellis’ institutional group in Atlanta. “What’s attractive is you have long-term leases historically that have credit or personal guarantees from the doctors. Many of the buildings we work on have a hospital affiliation or a significant commitment from a hospital, and that is extremely important. Doctors have legs and hospitals don’t, so you know the hospital’s commitment is there,” adds Asher.

For their part, doctors have a long-term interest in where they locate. “The physicians are building a practice. The location and access to the hospital and the other doctors who are in their building can be very strategic and important to the success of their practice. So they don’t tend to move a lot, and that keeps the retention ratio very high typically.”

One byproduct of the flagging economy, Asher points out, is that many doctors are delaying retirement. “As the economy has turned, doctors who maybe had intended to retire or sell their practices have seen their personal portfolios drop by up to 50% in the stock market. They are not as likely to get the price they had hoped for their practice, or they’re not ready to hang up the stethoscope.”

Essentially there are two major types of medical office buildings: properties that are situated near hospitals, and off-campus buildings that may be miles away from the nearest large medical facility. Growth in the off-campus property sector is fueled by consumer demand for more medical services to be located closer to residential neighborhoods.

“If you have an off-campus building that has a hospital as an anchor tenant or hospital sponsorship, that’s a very attractive asset,” says Asher. “In an off-campus setting that includes an ambulatory care center and a surgery center, physicians can do as many procedures there as they could in hospitals.” For their part, hospitals see the trend as a cost-effective solution, especially considering that the cost of building a new hospital is by some estimates around $1 million a bed.

Traditional medical office buyers include healthcare REITs and pension funds. “A lot of the REITs have shored up their balance sheets,” says Asher. “Most of them can navigate this market and be all-cash buyers without relying on the debt markets. They are probably going to be very active — and very strategic — on what they acquire and really go for a flight to quality because it will be available.”

On the sales side of the equation, Asher expects many hospitals to sell more of their non-core assets in 2009, including on-campus medical office buildings. “We expect to see that transaction volume will increase as a result of the hospitals seeking to monetize their assets.”

One major player in the medical office arena is Santa Ana, Calif.-based Grubb & Ellis Healthcare REIT, a private REIT that has purchased 116 medical office properties for $869 million since 2006.

“Grubb & Ellis really wanted to ride the demographic wave,” says Danny Prosky, executive vice president for acquisitions at the REIT. “You’ve got the baby boomers hitting their 60s and hitting their 70s and 80s over the next couple of decades. That’s where you see the real exponential growth in healthcare spending per capita. The demographic trends are in place for healthcare real estate needs to keep growing for a few decades.”

The big question is whether the bloom will finally come off the rose as the economy sinks further into recession. Asher points to two reasons he remains bullish on transaction volume flowing in 2009. “There is a lot of capital sitting on the sidelines that we expect to enter the market in early 2009. Investors are going to be attracted to this sector because they are going to see how it has been performing.”

Furthermore, Asher says, hospital executives are seeing their operating margins decrease because people are postponing elective surgeries, or deferring them altogether. Hospitals have to look for alternative sources of capital because they have also been affected by the debt market freeze.”

Poe Corn, managing director of corporate capital markets for Jones Lang LaSalle, notes that the sector’s luster may shine again in 2009. “We’re being told by a lot of the lenders that medical office will be the first sector they come back into. We’re hoping that will be in the first quarter of next year,” says Corn.

For the remainder of 2008, the sales spigot is closed tight. “I think all of the deals are baked in for this year, and that’s all we’re going to see,” says Asher. “I’ve talked to several institutional investors who have said they are done for the year, and that there will be no more closings.”