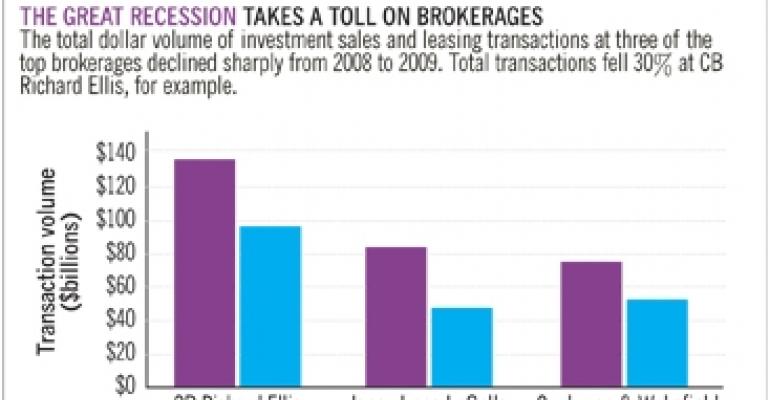 Faced with lower volume in leasing and sales transactions, major brokerage firms have struggled to maintain their coveted standing among the largest in the nation. But as transactions begin to tick up in 2010, companies are warring among themselves when it comes to poaching experienced talent.

The latest NREI Top Brokerage Survey clearly shows how far business activity at the largest U.S. real estate services firms has fallen. While Los Angeles-based CB Richard Ellis remains atop the heap, the total amount of its investment sales and leasing transactions fell 30% from 2008 to 2009 to $97.2 billion.

Similarly, the total amount of leasing and investment sales transactions at Chicago-based Jones Lang LaSalle plunged 43% on a year-over-year basis to $47 billion. However, sales have improved in a number of markets in 2010. In Washington, D.C., for instance, Jones Lang LaSalle’s Investment Sales team completed nearly $500 million in office, retail and land sales in the first half of the year.

One of the major fallouts from the slower deal flow in 2008 and 2009 has been reduced brokerage staffs, as the major firms cut scores of idle brokers from their ranks. Among the first to go were many junior brokers and support staff. Translation: In 2010, experience is now at a premium. Brokers who couldn’t add value for their clients as the market soured have been weeded out.

“It won’t be uncommon to see a more mature real estate industry with people who continue to stay vital longer,” says Christopher Ludeman, president of the Americas brokerage operation at CB Richard Ellis. “The shelf life of brokers in our business is longer.”

Thanks to improving transaction volume in 2010, the landscape for retaining and recruiting new talent is becoming more competitive. This year major brokerages are playing a game of one-upsmanship in announcing their latest hires.

In late April, Grubb & Ellis announced its hiring of Jeff Majewski away from CBRE to run its debt and equity operation. He was formerly chief operating officer of CBRE’s debt and equity finance group and senior managing director of its capital markets group.

Recently CBRE countered those salvos with its own announcement, trumpeting the fact that it had hired 30 new senior brokerage pros from January through April 2010. That figure pales in comparison to the hundreds of brokers CBRE laid off in the past two years, but it was obviously trying to make a larger point — it is actively recruiting senior-level talent while trying to maintain an overall lower cost structure.

“Competitively, people in this business don’t move for [commission] split. They’re smarter than that,” said White on the conference call. “They move for platform, and the platform that we have, the platform that our very worthy competitor [Jones Lang LaSalle] has are terrific platforms. I think you’re going to find that the highest-quality talent is going to end up generally at those two firms.”

And so the hiring game seems destined to play out for some time, particularly as firms move more aggressively to fill perceived service gaps with experienced brokers.

“One priority is to add and upgrade talent to increase market share and expand our expertise in new product lines such as healthcare, retail, and industrial,” says Jones Lang LaSalle’s chief operating and financial officer Lauralee Martin.

Certainly the brokerage business has become more complex as firms recover and staff up to offer one-stop solutions demanded by their corporate clients. That puts a further premium on experienced talent

“Whether it’s us or one of our competitors, talent management is very important,” says Ludeman. “Ours is an industry where I wish that the talent pool was broader and deeper, but finding the right people and keeping the right people will be the foundation of success or failure for companies.”