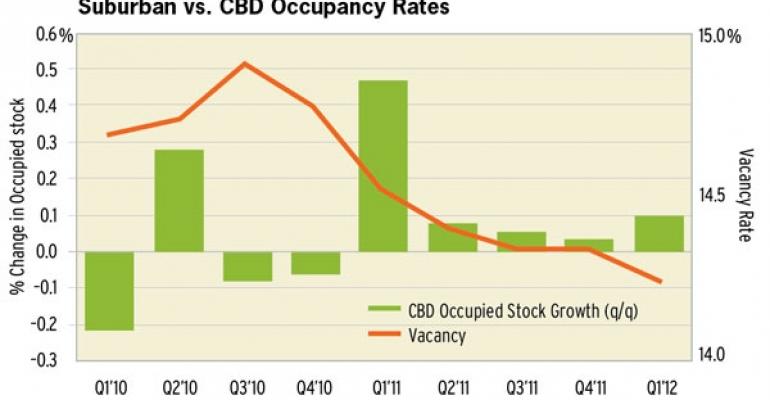 In December 2010, we discussed how recovery in office fundamentals manifested primarily in CBD office markets, with suburban markets remaining weak.

While suburban office markets gained more occupied stock than CBD properties in absolute terms, the figures do not look as impressive once relative measures are considered. Since suburban markets are about twice as large as CBDs (80 percent of all office construction from 1990 to 2010 occurred in suburban areas), occupied stock increased by about the same relative pace: around 0.8 percent over the last five quarters, relative to end-2010 figures.

The recession ended in June 2009, but economic growth and job creation has been very measured and office leasing has not been very robust. Although the pace of job creation increased slightly over the first four months of 2012, posting an average monthly gain of 200,750, office-using employment has not increased as fast as total job figures. Total employment increased by 1.6 percent year-over-year from the first quarter of 2011 to the first quarter of 2012; the comparable figure is only 1.3 percent for office-using employment.

Since many of the net job gains over the past 18 months have been in the education, healthcare and hospitality sectors, demand for office space has remained subdued.

National office vacancies fell only by a scant 40 basis points since it peaked at the end of 2010 at 17.6 percent, down to 17.2 percent by the first quarter of 2012. During healthier times, office sector vacancies could drop 40 basis points in a single quarter.

“With the pie of office leasing not growing quickly, both CBD and suburban areas may be posting improvements, but CBD properties are capturing more of the underlying gains,” notes Michael Steinberg, an analyst at Reis. As mentioned previously, CBD vacancies fell at a faster pace than suburban vacancies. At $29.64 per sq. ft., CBD effective rents are well past where they bottomed in 2010, having risen by 3.9 percent since the first quarter of 2010. By contrast, at $19.01 per sq. ft., suburban effective rents are only 0.2 percent above levels from the first quarter of 2010.

It can be argued that CBD gains could have come faster had occupancy growth not slowed starting in mid-2011. Banks, law firms, lenders and other financial services firms that occupy large swaths of CBD office space remain embattled because of the European sovereign debt crisis and the uncertain regulatory environment, and continue to announce layoffs and restructuring efforts. A convincing argument can also be made, however, that bank layoffs and failures will not affect just CBD office markets: Suburban branches of embattled lenders can be shut down, perhaps more easily, than bank headquarters located in central business districts.

The story remains the same

The trends we discussed in December 2010 remain in force, and will continue to exert downward pressure on suburban office fundamentals.

First, with single-family home prices continuing to remain near the bottom, job growth may remain depressed in suburban areas.

Second, technology and infrastructure that enable telecommuting like VPN access or free or low-cost videoconferencing may dampen demand more, on the margin, for suburban office space, vis-à-vis downtown headquarters where face-to-face meetings typically prefer to be held.

Finally, CBD office space remains cheap relative to suburban office space, given that CBD landlords had to lower rents more during the downturn.

If economic growth accelerates and job creation becomes more dispersed geographically, expect suburban office fundamentals to recover at a faster pace. However, it is likely that CBD office fundamentals will continue to turn in better performance measures over the next three to five years.