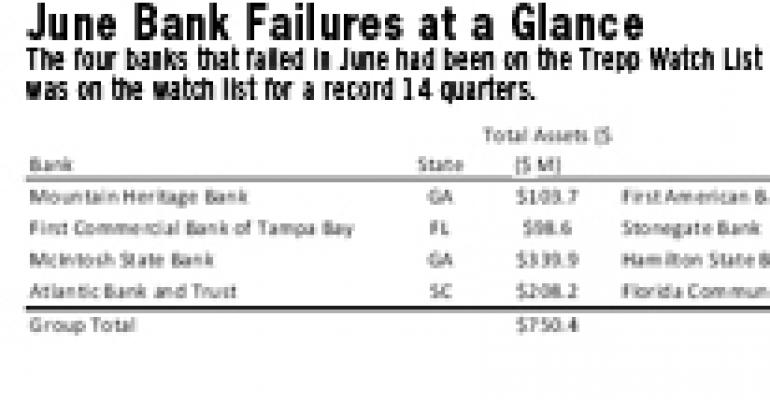 Bank Failures Will Likely Pile Up in Southeast U.S. for Months to Come, Trepp Warns

The Southeast continues to be plagued by a rash of bank failures caused by an excessive exposure to commercial real estate, and analysts say the trend isn’t expected to dissipate anytime soon. Of the four banks that closed in June, two were in Georgia, one was in South Carolina, and the other was in Florida.

Georgia continues to lead the country in bank failures with 14 through the first half of 2011 and 66 since the cycle began in 2007. Nationally, the news is more encouraging as the pace of bank closures continues to moderate. There were 48 bank failures during the first six months of this year compared with 86 during the same period a year ago.

“Nevertheless, a significant number of banks remain at elevated risk levels, and we expect to see more closures in the months ahead,” wrote Trepp analysts in their monthly U.S. Bank Failure Report released July 7.

The highest concentration of banks with an elevated risk of failure is in Georgia (53 banks), according to Trepp, followed by Florida (38), Illinois (23), Minnesota (15) and North Carolina (13).

All totaled, more than 200 banks on the Trepp Watch List are considered to be at a high risk for failure. Nearly all (91%) of these banks have been on the watch list for a year or more. These banks are predominantly smaller, with a median asset size of $198 million, reports Trepp. Only 16 of the highest risk banks have total assets in excess of $1 billion.

The residential real estate loan sector posted $25.2 million in nonperforming loans, or 21% of the total nonperforming balance. The remainder included commercial and industrial loans totaling $1.6 million, and $900,000 in consumer and other loans.

The loss severity ratio eased ever so slightly in June, with the estimated costs to resolve the failed banks edging down to 25% of failed bank assets compared with 26% in May.

Three of the four bank failures in June involved loss-sharing agreements with the Federal Deposit Insurance Corp. (FDIC), with 60% of the assets acquired being covered by loss sharing. The proportion of loss-share assets is down from 73% in May and 67% in April.

The origins of loss-sharing agreements can be traced back to 1992 in the wake of the savings-and-loan crisis. Under this structure, the FDIC agrees to share in loan losses that may be incurred by the acquiring healthy bank as a direct result of any nonperforming loans that it acquired from the failed bank.

The loss-sharing agreements also make it possible for the FDIC to share in any recoveries on nonperforming loans.

Trepp’s watch list of troubled financial institutions has successfully identified 96% of the banks that have failed in the cycle that began in September 2007. Banks on the watch list are nearly 200 times more likely to fail than banks not on the list.