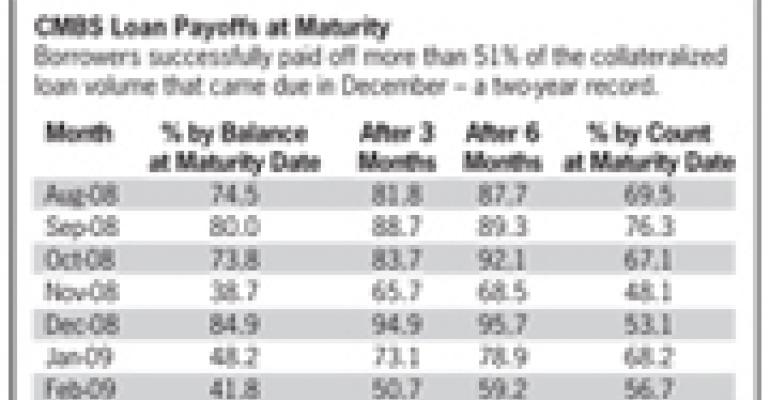 Borrowers paid off more than half of the securitized commercial real estate loans reaching maturity in December 2010, marking the highest monthly payoff rate in two years, according to Trepp LLC. The uptick suggests that replacement financing is growing more accessible to borrowers.

Of the $856.2 million in commercial mortgage-backed securities (CMBS) loans that matured in December, borrowers made balloon payments on time to retire $441 million. That is a 51.5% payoff rate, the New York-based researcher reveals in its “Trepp December Payoff Report.”

The analysis covers fixed-rate, U.S. CMBS loans and excludes delinquent loans or those that were defeased or paid off early.

“For the first time since December 2008, the percentage cracked the 50% threshold, providing more evidence that the CMBS market continues to heal,” writes Manus Clancy, senior managing director at Trepp and author of the report.

Trepp tracks some 60,000 CMBS loans totaling $725 billion. For all of 2010, the volume of mature loans paying off each month averaged just 34.1%, so the December numbers constitute a significant improvement.

Clancy attributes much of the gain in the rate of loan payoffs to recovering property values for trophy assets in primary markets. As investor competition to acquire such properties heats up, prices that plummeted when the financial crisis began in late 2007 are now closing in on their pre-recession levels in New York, Washington, D.C. and a few other major U.S. markets.

Capitalization rates are coming down everywhere, according to Clancy. The cap rate is the initial return to the investor based on the purchase price of a commercial real estate property and the annual net operating income it generates.

“The amount of negative equity a troubled property had two years ago is much less today largely because cap rates have really compressed. That gives borrowers who are on the cusp of having enough money to refinance a better chance of actually getting there.”

November results suggest that December’s high payoff rate may be a genuine trend rather than a one-time improvement, too. Some 17% of the loans that matured in November paid off in December, which would have added to the previous month’s payoffs had those loans closed out a few weeks earlier.

“Looking back at the November report, almost 54% of the loans due to balloon in November 2010 paid off either on time or within a month of the balloon date,” notes Clancy.

Numbers are all relative

The analogy of a glass half full couldn’t be more appropriate to describe the rate of balloon payoffs. Crossing the halfway point in monthly payoffs at maturity is a significant improvement compared with the past two years, but recent numbers fall far short of the market’s earlier performance. “Prior to 2008, the payoff percentages were typically well north of 70%,” says Clancy.

Yet increasing payoff volumes are heartening, even if the industry is only partially improved, according to Dan Fasulo, managing director at Real Capital Analytics. The New York-based research company tracks commercial real estate transactions.

“For the primary markets, we’ve definitely seen significant cap-rate compression over the past 12 months for most property types, over 100 basis points (of compression),” says Fasulo. “As property values have improved, it has given distressed owners more exit options from these troubled situations.”

It’s important to note that Trepp’s report covers only loans that performed on their original schedule up until the month of the final balloon payment. The report isolates how well borrowers with an otherwise performing loan are able to make their final payment, and is intended to improve loan-extension scenarios.

“Since so much attention was (and is) being paid to the extension trade, we were aiming for a measure of what percentage of loans would fail to pay off,” explains Clancy. “Hopefully the data above will allow investors to refine their expected extension scenarios.”

Another milestone in the December payoffs was a shift toward larger loans among those debts successfully retired on time. The percentage of loans paying off by loan count, at 46.3%, was smaller than the 51.5% of payoffs by volume. That means those loans paying off on time in December tended to be large.

Prior to the last month of 2010, payoffs by loan count tended to be higher than payoffs by volume each month. The only exception in the past two years was July 2010, when payoff percentages were 49.9% by volume and 39.5% by loan count.

“To translate, over the last two years the bias has been for the smaller loans that have found a way to pay off, not the larger ones,” says Clancy.

With downward pressure on cap rates extending beyond the primary markets, Clancy believes that borrowers in secondary and primary markets will have more and better opportunities to obtain financing in 2011 than they had in the past two years.

“The hope is that this will start to permeate into other markets,” says Clancy. “It’s a better environment right now to refinance than it was awhile back.”