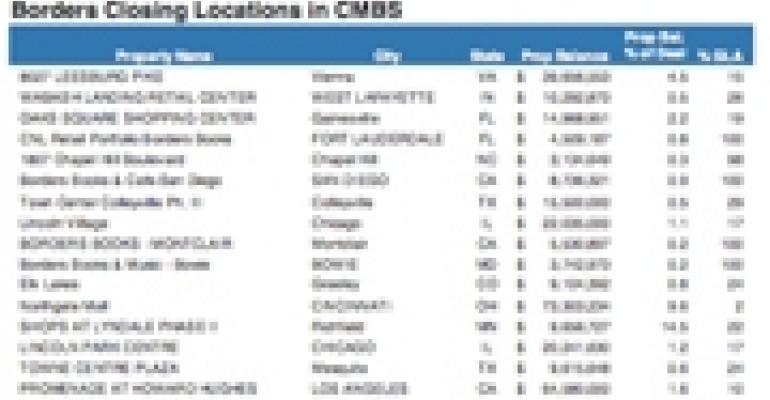 Correction: The ninth paragraph citing CoStar has been corrected. There are 400 centers in the U.S. with a Borders, not 200.

After the retail sector went through an entire year with few major bankruptcies or liquidations, the announcement of Borders’ Chapter 11 filing last Wednesday served as an unwelcome reminder that the industry is not out of the woods yet.

While the planned closing of 200 underperforming stores by Ann Arbor, Mich.-based Borders will certainly put additional pressure on retail landlords, the impact should be far less devastating than the Circuit City bankruptcy in 2009 and the Linens ’n Things filing in 2008, according to two research firms that track the securitized lending market for commercial real estate.

“The good news is it’s 2011, not 2008,” says Manus Clancy, senior managing director with Trepp LLC, a New York City-based provider of CMBS and commercial mortgage information. “The last three years have been tough on mall owners, and the loss is not a good thing. But by the same token, you are not losing a Sears.”

The CMBS market’s total exposure to Borders stores, both those slated for closing and those that will continue to operate, comes to 3 million square feet of space—about one-fourth the impact that Circuit City had on the CMBS universe, according to Steve Jellinek, vice president with Realpoint LLC, a Horsham, Pa.-credit rating agency and research firm.

Trepp estimates that the 200 announced closings will affect approximately 50 retail centers within existing CMBS pools. Meanwhile, Realpoint estimates that there are approximately 33 centers encumbered by CMBS loans that will be affected by Borders’ closings. At 13 of those centers, Borders occupies the entire building. At another 15, it takes up at least 50 percent of the space. Altogether, the closings will push occupancy rates below 80 percent at 29 retail centers.

For regional malls greater than 1 million square feet, the closings likely won’t turn into a major issue because at less than 50,000 square feet, Borders stores aren’t large enough to lower occupancy rates to dangerously low levels. The closings probably also won’t trigger co-tenancy provisions, says Clancy. (Co-tenancy provisions are clauses within retail leases that allow tenants to switch to lower rents or vacate the property if another retailer exits the center, or if the overall occupancy falls below a certain level, usually 80 percent.) Smaller centers and standalone Borders locations could face greater problems, however.

There are some freestanding Borders in the market and some centers where Borders serves as the main tenant. Owners of those centers will likely feel the pain from the bankruptcy more keenly. But because their properties are generally smaller, their loans won’t exceed $15 million or $20 million, according to Clancy. In other words, the owners might struggle to make their mortgage payments, but the losses for the lenders will be minimal.

That’s a concern because at properties like this, once occupancy falls below 80 percent, co-tenancy provisions do kick in, reducing cash flow from the remaining tenants, says Jellinek. That might push some owners who were teetering on the edge into default.

According to estimates by CoStar Group, a Washington, D.C.-based research firm, there are more than 400 retail centers in the U.S. that feature a Borders superstore. With Borders closing stores at 200 of these retail centers, they will experience a vacancy increase of 530 basis points to 9.5 percent, which is higher than the current national vacancy rate of 7.2 percent.

“If I’ve got a shopping center and I lose a 30,000-square-foot tenant, it’s definitely going to severely impact my financial situation,” says Chris Macke, senior real estate strategist with CoStar. “That’s not only because of the lost revenue from the Borders, but also because of the lost foot traffic that will affect other tenants’ sales. And it could lead to losing other tenants as well.”

The saving grace is that many of the Borders slated for closing are in attractive locations, says Andy Graiser, co-president of DJM Realty, a Gordon Brothers Group company that specializes in strategic real estate solutions, dispositions and valuations. That means landlords will have an easier time getting alternate space users to backfill the buildings.

DJM will be helping Borders dispose of its excess real estate, so Graiser is quite familiar with the stores. The units average about 24,500 square feet each, though some stores are as small as 13,000 square feet while others are in excess of 40,000 square feet. The portfolio is scattered throughout the country, but many of the stores are in primary markets including New York, Boston and Chicago.

The morning after the bankruptcy announcement, DJM was already receiving calls from parties interested in looking at some of the spaces. Graiser says some retailers that might be interested in picking up vacant Borders over the coming weeks and months include supermarket chains, furniture stores and electronics sellers. Some spaces might also be leased by gyms and bowling alleys.

“Over a three-year period, I think you will see a good amount of absorption,” Graiser notes, though he adds that it will likely take longer than that for the market to absorb the entire portfolio.

Plus, there is the question of how the rents on the new leases will compare with what Borders was paying. The asking rent for a 21,338-square-foot Borders in the Kips Bay section of Manhattan is $51.04 per square foot. That’s almost three times the quoted average of $17.79 per square foot for power centers nationally, according to fourth-quarter 2010 statistics from CoStar.

In very good markets, the incoming tenants will likely be willing to pay rents that will be comparable to those paid by Borders, according to Graiser. But in smaller markets, the landlords might have to be more aggressive about the pricing, says Macke. The discounting, however, will likely not have to be nearly as drastic as that needed to backfill empty Circuit City and Linen ’n Things buildings.

“We had a year and a half of positive net absorption in retail,” Macke notes. “So the space will be absorbed a lot faster today than it would be 18 months ago.”