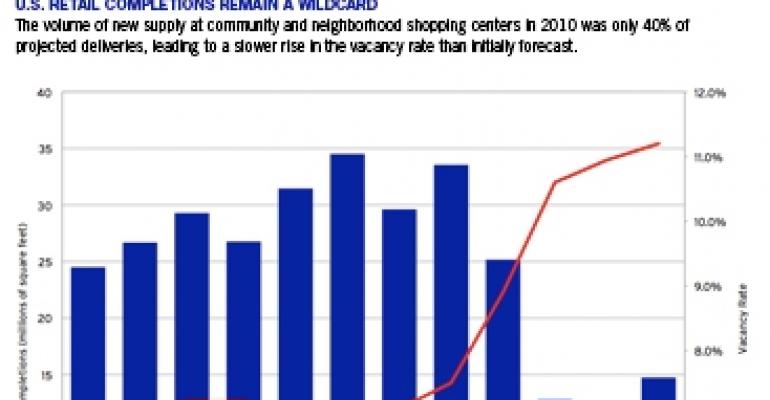 More than 7 million sq. ft. of retail projects slated for completion in 2010 were delayed or cancelled. This pullback in construction led to only 4.1 million sq. ft. of retail space coming on line, the lowest figure for annual deliveries in the 30-year history of Reis. The recovery prospects for the retail sector will depend critically on whether these properties are delivered in 2011, or have been cancelled altogether.

From 2004 to 2008, an average of 26.2 million sq. ft. of new strip mall space opened for business annually. It was only in 2009 when deliveries slowed to a trickle in response to challenging economic conditions that completions fell below 13 million sq. ft.

At the end of 2009, Reis expected more than 11 million sq. ft. of new retail space at neighborhood and community centers nationally to come on line in 2010. Year-end 2010 vacancies were also expected to hit 11.3%, but with actual supply coming in at only 40% of projected deliveries, vacancies stabilized at 10.9%.

Many projects were cancelled, whether in whole or in part. For example, the proposed 120,000 sq. ft. development of Westfield Commons Center in northeast Phoenix was postponed. Shops at Schmidt in Philadelphia was supposed to be a 100,000 sq. ft. retail center, but only 50,000 sq. ft. was completed (now occupied by grocer Pathmark). Whether the rest will be built is to be determined.

Supply is the wildcard

The vast majority of the 7.3 million sq. ft. that did not materialize in 2010 will get built in 2011. This surge in deliveries implies that retail recovery may be derailed if unwanted supply materializes without a proportional increase in demand.

There is certainly more aggregate demand expected in 2011, with the U.S. economy expected to grow at 4% versus about 3% in 2010. However, whether retail vacancy rates will remain stable or begin to decline will largely depend on retail tenants betting on the American consumer returning in droves.

Already we see retailers poised to take advantage of rents knocked back to levels unseen since 2006. We may see a flurry of leasing activity in 2011 as tenants try to lock in low rents. This is the demand side of the equation.

On the supply side, Reis is projecting more than 14 million sq. ft. of new retail space to come on line in 2011. One reason is that several projects delayed in 2010 will be delivered early this year.

If this comes to pass, completions will more than double versus the lows of 2010. Preleasing has been shoddy at best, with many centers coming on line 50% to 100% vacant. This trend will put upward pressure on vacancies.

Reis projects the vacancy rate at neighborhood and community centers nationally will reach 11.2% by the end of 2011. If realized, this would exceed the historic high of 11.1% recorded in 1990.

Recovery should begin to kick in by early 2012 as vacancies decline and the sector works off the lingering effects of overbuilding. The bottom line is that the bulk of distress is behind us. However, current trends also imply that though we may have hit the bottom of the hole, the climb back out may take another 12 months.