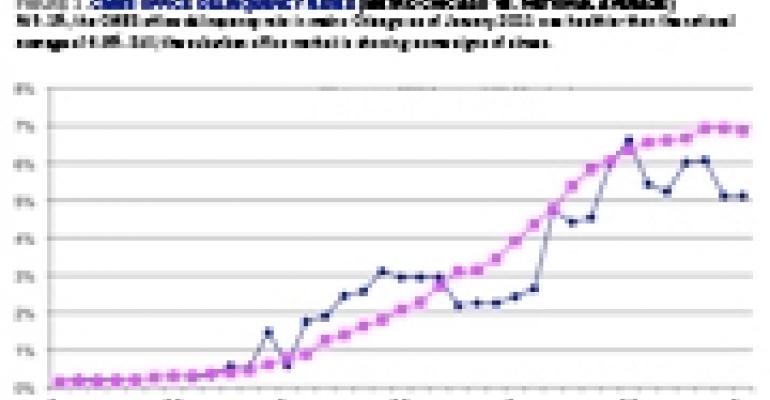 Although the Chicago office market is beset by high vacancy rates and flat or declining rents, prudent loan underwriting and a dearth of new construction have helped soften the blow. The Windy City’s 5.1% delinquency rate on securitized office loans was the fifth best performance among the top 25 metropolitan statistical areas in January, according to Trepp LLC. The national average was 6.9% [Figure 1].

Of the $8.1 billion in CMBS office loans due to mature over the next seven years in the local market, only 7% of the loans have a debt-service coverage ratio under 1.0 and/or a loan-to-value of greater than 100%. “This indicates that most properties in this pool have performed quite well and have weathered the downturn,” says Paul Mancuso, a vice president with New York-based Trepp.

Even 10-year paper from the 2005-2007 time frame has experienced a similar level of distress, according to special servicers, reflecting the market’s ability to maintain property valuations and not get caught up in the lax underwriting standards at the height of the real estate boom. The data also bodes well for Chicago office owners seeking to refinance CMBS loans, Mancuso says.

Only Boston, New York, Washington D.C, and Portland, Ore. posted lower CMBS office delinquency rates than Chicago in January [Figure 2]. Among the worst performers were Miami, Tampa and Phoenix — markets that experienced a real estate boom during the early and mid-2000s, but which are now reeling. “Where you are seeing weakness is where you expect to see weakness,” says Mancuso.

Setback in the suburbs

Eight of the 10 largest CMBS office loans at least 60 days delinquent involve suburban properties, according to Trepp. The largest delinquent office loan in metro Chicago is the $115 million unpaid balance on Continental Towers located in the northwest suburb of Rolling Meadows. Trepp lists the loan’s delinquency status as REO. The Class-A property was built from 1977 to 1983 and consists of three 12-story office buildings totaling 932,584 sq. ft.

The loan on Continental Towers was transferred to special servicing in January 2010 due to imminent default. The borrowers were two affiliates of Prime Group Realty Trust, each of which owned a separate portion of the complex. The lender was CWCapital LLC. The borrowers agreed to a deed-in-lieu of foreclosure and CWCapital took title to the property on June 14, 2010. The property’s occupancy rate stood at 58% as of December 2010.

When the CMBS loan was originated in 2006, Ameriquest Mortgage was the largest tenant at Continental Towers. The subprime lender occupied 232,000 sq. ft., or about 25% of the net rentable area. But when the subprime market collapsed in 2007, Ameriquest shut down its operations.

Ameriquest was actually one of several subprime lenders in the northwest suburbs at the time. Collectively, the subprime office tenants occupied more than 2 million sq. ft., estimates Paul Lundstedt, executive vice president of the institutional capital markets group at brokerage Grubb & Ellis. “The subprime market imploded and was gone overnight. That just really laid an egg in that submarket. It created a huge supply.”

According to Trepp, many suburban markets have had difficulty attracting and retaining tenants in part because concessions are so widespread. In addition, the central business district (CBD) has become a viable choice again for many cost-conscious tenants who are weighing all their options.

Traditionally there is a flight to quality following an economic downturn, says Lundstedt. “Tenants are able to negotiate and move into higher-quality buildings at a lower cost than if the market was stabilized. The buildings at risk are the Class-B and Class-C-oriented assets compared with the true Class-A properties.”

While the entire Chicago office sector continues to show signs of strain, the vacancy problem is more acute in the suburban market than the CBD. In the suburbs, the average vacancy rate was 24.8% in the fourth quarter compared with 17.4% in the CBD, according to Grubb & Ellis.

“You look at the suburban markets and you say, ‘What are the growth drivers going forward? Where is the employment going to come from?’” says Lundstedt, who remains optimistic much of the space will eventually get absorbed.

Only 48,000 sq. ft. of office space was under construction in metro Chicago at the end of 2010, which is remarkable considering the office market is 235 million sq. ft. The dearth of new construction will help facilitate the absorption of existing space.

“We are all encouraged from the standpoint that the bleeding has stopped,” says Lundstedt. “Companies’ balance sheets are healthy. The giveback of space has slowed dramatically.” In addition, Corporate America is once again entertaining the idea of taking on additional space, a healthy sign.

After shedding 8.7 million nonfarm payroll jobs from February 2008 to February 2010, the U.S. economy has since regained about 909,000 jobs, according to the U.S. Bureau of Labor Statistics. Closer to home, the unemployment rate in metro Chicago stood at 8.6% at the close of 2010, down from 10.6% a year earlier. (The figures are not seasonally adjusted.)

Now that the office market has bottomed, says Lundstedt, the question turns to what kind of recovery it will be. “Is this the bathtub recovery that is going to take a long time before we see the real upswing, or is it a V-shaped recovery? The conventional thinking is that it’s going to take awhile.”