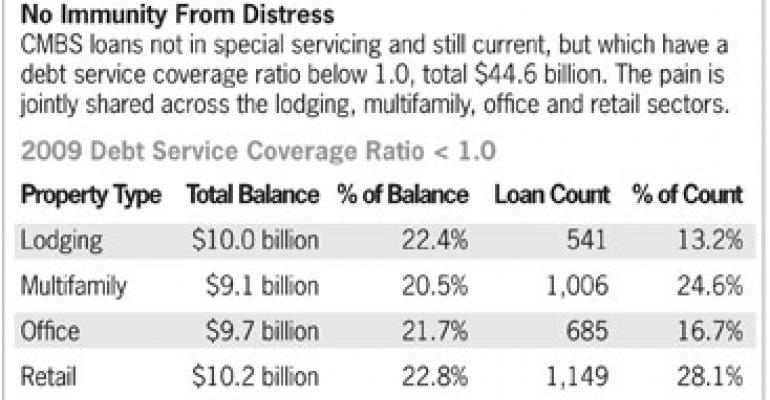 An analysis of nearly 34,000 fixed-rate loans in U.S. commercial mortgage-backed securities shows that 13.7% have a debt service coverage ratio of less than 1.0 — a strong sign of financial weakness. Based on its findings, New York-based research firm Trepp LLC expects the percentage of CMBS loans in special servicing to continue rising from 11.7% through May to as high as 20%.

If realized, that could result in $75 to $80 billion in troubled loans headed for special servicing on top of the $82.8 billion already occupying that spot. Trepp officials don’t expect the default rate on CMBS loans to peak until mid-2011.

On a year-over-year basis, 56% of the CMBS loans in the Trepp study experienced deterioration in debt service coverage ratios compared with 44% that showed improvement. Trepp’s findings raise a red flag for borrowers and CMBS bondholders already feeling the pinch of a sharp downturn in commercial real estate and slow economic recovery.

The debt service coverage ratio is an important tool for researchers because a figure less than 1.0 means that there is insufficient cash flow for a property owner to service the debt. The ratio is calculated by dividing the annual net operating income a property generates by the annual mortgage payment.

Trepp sampled about two-thirds of all loans in the U.S. CMBS fixed-rate universe with a combined balance of nearly $392 billion. Only properties with a 12-month set of financials for calendar year 2009 were included in the analysis. The analysis reveals that 4,663 CMBS loans with a combined loan balance of $53.8 billion have a debt-service coverage of less than 1.0.

Surprisingly, $44.6 billion of that $53.8 billion loan balance has not yet been transferred to special servicing and is considered current on mortgage obligations, says Paul Mancuso, a vice president with Trepp. “This leads to two main conclusions. First, there appears to be plenty of room for the percentage of loans in special servicing to grow,” emphasizes Mancuso.

“Second, since most loans are current, property owners have been willing to reach into their own pockets during this economic downturn to keep a property afloat, while others may be burning through debt service reserves to cover interest shortfalls,” adds Mancuso. It’s unclear how long that strategy will be viable for borrowers.

Of the $44.6 billion in loans that are considered current but have a debt service coverage ratio below 1.0, approximately $35.7 billion, or 80%, were generated from 2005 through 2007, a period marked by lax underwriting standards. “During this time, pro-forma underwriting painted a rosy picture of future property fundamentals and valuations,” according to Mancuso.

“This is in direct contrast to the current economic environment,” concludes Mancuso, “which is characterized by occupancy concessions and declining rents and room rates, especially in troubled markets and aging properties."