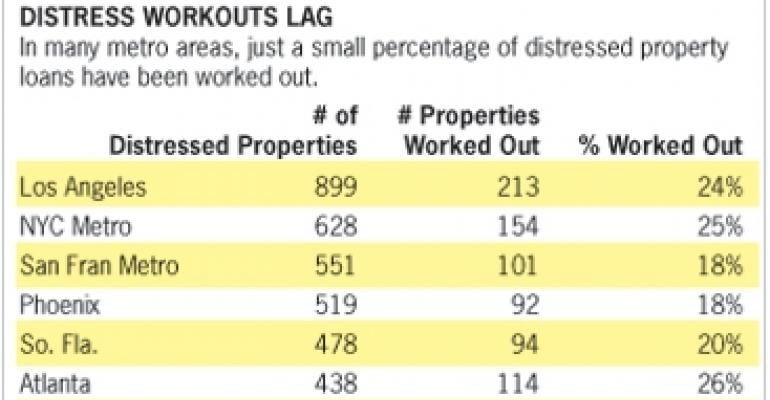 Distress Report Card: Resolutions Have a Long Way to Go

Less than a third of all distressed properties across the country have been resolved, according to a new study from New York-based researcher Real Capital Analytics (RCA).

Through March 31, only 29% of the total $236 billion in multifamily and commercial real estate assets that have fallen into distress during the current cycle had been worked out, either through restructuring and extension or a sale of property.

Given the current policy of “extend and pretend” by most lending institutions, loan modifications totaling $36 billion have outpaced resolutions through sales of $33 billion worth of distressed assets. Only 11% of the cumulative distress assets have gone back to lenders in the form of real estate owned (REO).

Of the 11,650 properties included in the cumulative measure of distress, fewer than 1,700 have been resolved through a property sale, according to RCA. Another 1,060 have been restructured or extended, falling short of the nearly 1,800 relatively smaller balance loans in lender REO.

All of these counts are dwarfed, however, by more than 7,100 properties that remain in troubled status with the nation’s banks and other lending institutions.

As with any market trend, there are winners and losers when it comes to how cities are dealing with distressed properties. “In metropolitan areas where the recession has been relatively milder, including Dallas and Houston, there has been significant progress in working through troubled situations,” notes RCA.

In many markets that were hardest hit by the recession, some progress has been made. For instance, in the hard-hit apartment markets of South Florida, Tampa and Orlando, one-third to one-half of cumulative distress has been worked out through a combination of loan modifications and sales. In Tampa and Orlando, over half of all sales have been related to distress.

For healthier markets, sales of distressed assets are overshadowed by investors’ acquisitions of stable properties. In New York City, for example, one in four distressed situations have been worked out. And yet, during the 12 months ending March 31, sales resolving distress accounted for just 6% of the metro’s property sales count.

In other distressed markets, progress has been slow as the pipeline of troubled assets continues to grow. This volume could slow both pricing and credit standards even as the overall economy improves. “At the extreme, and barring an acceleration of workout activity in Las Vegas, it will take between 12 and 15 years to tackle that market’s challenges,” says the report.