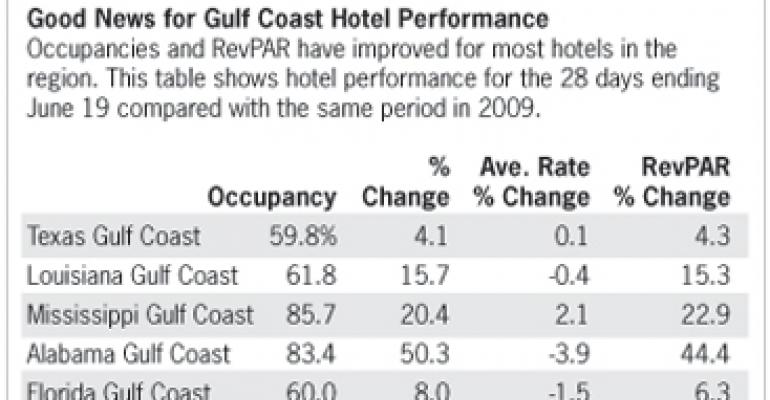 Despite the dire headlines and the arrival of oil on their pristine beaches, hoteliers along the Gulf Coast don’t seem terribly worried about the short- and long-term effects of the oil spill catastrophe on their business or the value of their assets.

Through the first 80 days of the spill, more than eight million barrels of oil (about 336 million gallons) have spewed into the Gulf of Mexico, reaching beaches in all five Gulf Coast states.

Still, lodging industry performance in the region is on the rise so far this summer compared with 2009. Hotel owners cite several reasons: excellent weather, massive media campaigns imploring tourists to visit, and the replacement of many traditional resort guests by business associated with the oil spill clean-up.

Another reason for optimism is a $20-billion reparations account funded by BP that some hotels and other tourism businesses may be able to tap into to mitigate the effect of their losses.

According to Smith Travel Research, for the 28 days ending June 19, occupancy for hotels within 10 miles of the Gulf Coast was 63.8%, up from 57% during the same period last year. And while rates dipped slightly, revenue per available room (RevPAR) improved by 10%.

“It hasn’t been nearly as bad as it’s been portrayed in the media,” says Baker Clark, owner of a Best Western in Navarre, Fla. “While future bookings look a little dismal, we’ve made up many of the cancellations with walk-in business.”

And as ill timed as it seems, several new beachfront hotels have opened in the past month in the region. The biggest splash was for the first Margaritaville Hotel, a 162-room resort on 800 feet of water in Pensacola Beach. The hotel is owned by island crooner Jimmy Buffett. Backed by a lot of press coverage, the property has been doing brisk business.

The effects of the spill on the Gulf Coast hotel business also differ from community to community. For example, while Biloxi, Miss., is a beach town, its booming casino business fuels the local tourism economy.

“The oil hasn’t hit our beaches yet,” said Euan McGlashan, project managing partner for a beachfront Four Points by Sheraton that opened in Biloxi on July 1. “But even with our spectacular beaches, very few people have been on them. This is a casino town, so while the stigma of the oil spill may hurt us a little, it’s not going to stop people from coming to Mississippi and our casinos.”

The 195-room Four Points is a milestone for Biloxi. It sits on the spot where a 10-story condo tower was destroyed during Hurricane Katrina in 2005. The hotel is the first new-build hotel in the community since the storm and is Starwood’s first hotel in Mississippi.

“I’m very optimistic about this project,” says McGlashan. “We sit in the shadow of three casinos and expect to benefit from that business. Also, there is a lot of pride in this community as it has fought back from the effects of Katrina.”

The oil spill has turned out to be a boon for many Gulf Coast hoteliers. A lot of hotel owners don’t like to talk about what Miami-based consultant Scott Brush calls “the hurricane effect,” or the extra business many properties get when government officials, media, insurance adjustors and others descend on a disaster zone.

The problem for resort properties is that these guests don’t generally spend as much on discretionary items like spa treatments, golf and other things as do leisure customers.

A recent survey from The Knowland Group confirms the trend. Two-thirds of the Gulf Coast hoteliers in the study say they’ve seen an increase in bookings from people associated with the spill and its cleanup.

For some hotels, the bookings are substantial: one-third of the hotels are getting 25% to 50% of their business from cleanup workers. Several of the surveyed are completely full with guests working on the spill cleanup.

And while these guests don’t spend as much on meals, spa appointments and golf as do leisure customers, they’re staying longer than typical resort guests. A little more than half of the spill-related guests are staying at least a week, and 14% for two weeks.

What about hotel valuations?

Despite the optimism among many hoteliers, there’s still a lot of uncertainty over how strong business will be for the remaining six to eight weeks in the season. And just as it’s difficult to pin down the changes in hotel valuations following the economic downturn, it’s hard to judge the effect this unprecedented event will have on the value of hotels and, by extension, the ability of owners to sell, at least until business returns to normal.

“Beachfront real estate carries a high risk, not only because of oil spoils, but because of things like hurricanes, erosion and the need for sunny days, all of which are out of control of managers and owners,” says John W. O’Neill, associate professor at the Penn State School of Hospitality Management, managing director of Hospitality Advisory Services and Lodging Hospitality’s Valuations Editor.

“With that risk comes high rewards over time. In fact, average hotel values in the region may actually end up being higher this year than last.”

Rich Warnick, president of Warnick + Co., a Phoenix-based hotel advisory, asset management and investment banking firm, believes for the most part any hotels in the Gulf region that might be in trouble “aren’t the kinds of assets institutional buyers in the public market are chasing anyway.

“But to the extent there are good and valuable assets in the region, there is so much capital chasing so little product that somebody might still bid up for these properties,” he says. “They may take a more optimistic view that instead of having one year’s worth of problems they’ll have two, but it will be worth it in the long run.”

For some Gulf Coast hotels already in financial distress, the oil disaster could be a minor blessing. As Lodging Econometrics President Pat Ford says, given the situation, banks will probably be more understanding to owners and provide at least temporary extensions or modifications to loans.

“It’s a situation in which no one has any control over, and it’s not a problem between the lender and the hotel owner. It’s an act of nature, so there should be a little more understanding,” says Ford. “And besides, it’s not the best public relations move at this time to get tough with borrowers when they’re having these kinds of problems.”

Every analyst agrees it’s smart for asset owners to be proactive, particularly if their hotels or portfolios are in distress or on the verge. “If you’re a substantial owner with deep pockets, my advice is to hang on because like everything else, this too shall pass,” says Brush.

“On the other hand, this is probably the best time to talk to your bank,” Brush is quick to add. “It’s always better to communicate when the anticipation of a problem may be greater than the ultimate problem.”

In some ways, the current disaster is similar to the aftermath of Hurricane Katrina. Clark, the Best Western owner, says that after the disaster local banks accommodated a number of hotel owners in the community by allowing them to pay interest only on their loans, or to not make any payments for a few months. “My bank says it will be sympathetic if times get tough for me,” he says.

Eventually, many of the Gulf Coast hoteliers should be able to tap into the $20 billion reparations fund created by BP, the oil firm which leased the Deepwater Horizon offshore drilling rig that exploded in late April, unleashing thousands of gallons of oil a day into the Gulf.

Clark says he filed an initial claim about eight weeks ago and received a $5,000 check to help cover his losses for May. BP told him it will send $14,000 for June once he files a claim for that month.

According to BP, as of July 9, the firm has written 51,700 checks totaling $163 million to businesses and individuals affected by the spill.

“That money will just about put me even with the business I would have done without the spill,” Clark says. “Although that money came directly from BP, I’m a little worried once the government takes control of the claims process.”