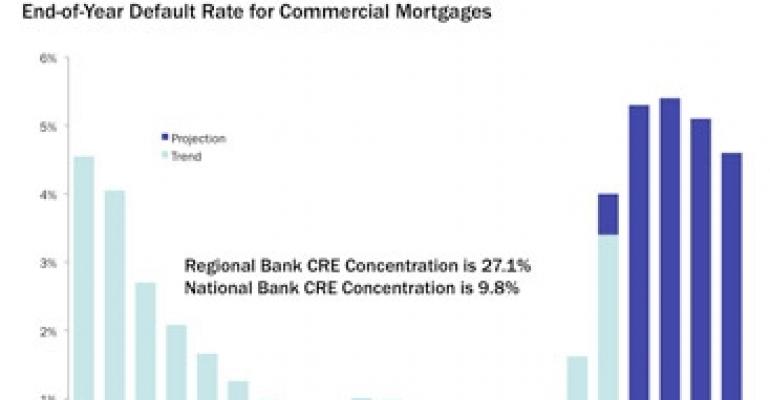 With the default rate on commercial mortgages held by U.S. depository institutions projected to reach 5% this year and not peak until 2011, the extremely tight credit conditions imposed by banks on borrowers are not likely to loosen anytime soon. So says Sam Chandan, global chief economist and executive vice president with Real Capital Analytics (RCA).

“If you believe that not only are we at a 15-year high in terms of the default rate of commercial mortgages being held by banks — but that there is the potential for that default rate to continue to climb over the next couple of years — then history tells us we must concede that credit conditions at least on the part of community and regional banks will remain unusually constrained over the next couple of years,” says Chandan.

Real Estate Econometrics, recently acquired by New York-based RCA, forecasts that the default rate for commercial real estate mortgages held by depository institutions will reach 5.2% by the end of 2010 and peak at 5.3% in 2011. At the beginning of 2009, the national default rate stood at 2.25%.

The root of the problem is that the U.S. economy has shed about 8.4 million jobs since December 2007. Such massive job losses have led to rising vacancy rates, falling rents and a sharp drop in net operating income for many owners of commercial and multifamily properties.

“We have millions of jobs that we need to replace before we experience aggregate new demand for commercial space in a way that can allow for sustainable increases and improvements in the underlying performance of the properties,” emphasizes Chandan. “That’s problematic for us.”

The audience included hundreds of brokers from NAI Global. Based in Princeton, N.J., the broker network includes 5,000 professionals spread across 325 offices in 55 countries. Stung by a precipitous decline in investment sales and leasing volume over the last two years, brokerages are ramping up efforts to capitalize on distress opportunities in commercial real estate.

The special assets solutions team at NAI, for example, works to preserve and recover value in underperforming assets. The services offered include asset management, property management, leasing, valuation and disposition.

In 2009, U.S. banks were largely in denial about the non-performing loans on their books, says Olasov. “Everyone laughed, everyone knew about the extent of the problems, but their public face was ‘we have no problems.’”

But this year will be different, Olasov predicts. “In 2010, I think it’s going to be a year of increasing recognition of these problems, and at least with respect to some banks the movement of those non-performing loans into the marketplace. And that could be an enormous opportunity.”

The problem is not concentrated in the global banks, which have relatively little exposure to construction loans and core commercial real estate, explains Parkus of Deutsche Bank based in New York. Rather it’s the community banks that are most at risk, he insists. Relative to their asset base, community banks have about 10 times more exposure to commercial real estate than large global banks.

“If you look at the smaller community banks, 10% of their assets are in construction loans. Something very close [to that percentage] is in commercial real estate loans. That’s really a huge problem for the entire economy,” emphasizes Parkus, who has conducted extensive research on loans contained in bank portfolios.

Compared with CMBS loans, a much larger percentage of loans in bank portfolios are secured by transitional properties — assets that are of lower quality and in more tertiary locations, says Parkus. He anticipates that the loss severities on troubled bank loans are going to be “very problematic.”

Have we hit bottom?

The Moody’s/REAL Commercial Property Price Index shows that property values have fallen 43.7% since their peak in 2007. Some market observers say that the Moody’s figure distorts the true picture because there have been so few transactions, and the ones that have occurred have been mostly involved distressed assets.

“I guess my response is that distress properties are a very large percentage of the outstanding universe out there today,” says Parkus. “I tend to think these numbers are right. We have been projecting for the past 18 months that commercial real estate prices in aggregate would fall somewhere between 40% and 50%. We think that they are down 40% to 50% now.”

About 20% to 25% of that price decline stems from the “rolling back” of underwriting standards and the much higher financing rates in the market, according to Parkus. The drop in net operating income accounts for another 10% to 15% of the price decline.

Property prices have probably hit bottom, Parkus believes. “We don’t expect to see significantly [more] price declines. We do expect to see continued declines in commercial real estate fundamentals, rising vacancies and declining rents throughout 2010 at least, but at a much slower pace.”

In the CMBS arena, the loan servicers have their hands full these days as the volume of troubled loans mounts. The only absolute is that there isn’t a one-size-fits-all approach to resolving issues.

“In commercial real estate workouts, it’s very situational,” explains Berger of Midland Loan Services based in Overland Park, Kan. “You have to understand the property, the market, the borrower, his motivations and capabilities.”

The first consideration is to determine whether the existing sponsor, or borrower, is part of the solution or the problem. A lot of debt issued from 2005 to 2007 went to unseasoned owners who were not good managers and who became overleveraged, says Berger. “In those situations, the solution is more likely that you are going to foreclose, take back the property and sell it in a very depressed market.”

Conversely, Midland is encountering many situations where the asset is of high quality, the sponsor is strong and the market is desirable. Quite simply, the problem is that the property is overleveraged. In those instances, Midland requests the borrower bring in fresh capital as part of the solution to either pay down the loan balance, or invest in the property.

Back on the banking front, Chandan says that the Federal Deposit Insurance Corp. isn’t content to sit idly by and watch the commercial real estate loan crisis fester indefinitely.

“What we’ve heard from the FDIC is now that the immediate crisis in the banking sector — at least for the largest banks — has abated, it will in a more significant way begin to work with community and regional banks to ensure that some of these assets do start to move.”

That is sweet music to the ears of NAI members and brokers everywhere.