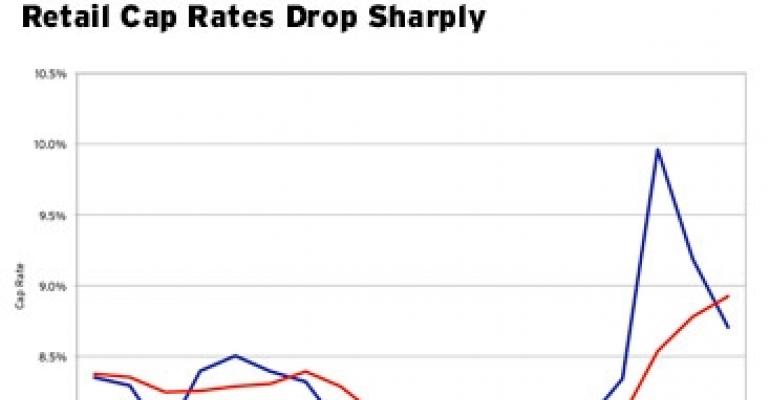 The retail sector has endured more distress over the last two years than any other property type, with the possible exception of hotels. As consumers in the U.S. have cut back on discretionary spending, thousands of establishments ranging from retailers like Circuit City and store operators such as Mervyns have closed shop or filed for bankruptcy.

However, as the economy stabilizes and retail sales figures begin to rise, lenders and investors are looking for signs that retail property prices have bottomed out. And as each quarter passes, compelling evidence is emerging that the next six to 12 months may provide a great window of opportunity for lenders and investors with funds to deploy.

Indeed, negative fundamentals have already been building for more than two years. Rents and occupancies deteriorated in record amounts across retail property types in 2008 and 2009. Regional mall vacancies hit 8.8% by year-end 2009, the highest level on record since Reis began covering malls in the first quarter of 2000.

Even the stalwart neighborhood and community center property type — long perceived to be stable given its association with grocery and pharmacy anchor tenants — has come under assault. Negative absorption was recorded in the first quarter of 2008, in lockstep with an economic contraction. By the end of 2009, vacancies had hit 10.6%, a level unseen in 18 years.

Pricing and transaction volume patterns followed accordingly. The average price per sq. ft. for strip malls fell by 42.6% from a peak of $216 in the second quarter of 2008 to $124 by the end of 2009. Over the same period, quarterly transaction volume fell by 64.8%, from $4.6 billion to just $1.6 billion, as risk aversion amid the credit crisis prompted investors to flee to safer havens.

Where then is the resurgence of hope that might prompt investors and lenders to begin investing in retail properties? Not in fundamentals like rent growth in the near-term, which will remain depressed until well into 2011.

Given typical cycles in commercial real estate, a recovery in rents and occupancies will lag stabilization in the domestic economy and labor markets by at least 12 months. The critical question is whether the low level of transaction prices reflects this expectation of depressed income over the next two years, or if prices will fall further.

Capitalization rates, a key measure of expectations of property income and values, have begun to fall, one indication that investor appetite for retail properties has begun to turn. In fact, cap rates fell from a high of 10.0% in the second quarter of 2009 to 8.7% by the end of the year.

This is partly driven by selection bias: transactions that occurred in the latter half of 2009 tended to be between well-capitalized buyers and sellers, with high quality properties boasting stable tenant rolls.

But this is precisely the job of the astute investor: to select properties that survived the devastation, purchasing them at bargain prices. And lenders — like investors — are now on the prowl for Class-A properties at Class-C prices, lending at conservative levels to properties that have weathered Darwinian conditions and emerged intact.

Interestingly, the biggest challenge that lenders and investors may face over the next six to 12 months is fierce competition for the best assets. Since we’re in for a few more years of distress, there are a scant number of investors that are willing to gamble on lower grade properties. This singular focus on better assets means that anywhere from 20 to 40 banks are competing to provide financing for higher quality properties.

Buyers also may need to compete with other interested parties for the most prized deals. The biggest example in the market today is Simon Properties, which recently publicized its bid for General Growth Properties. The offer has drawn much attention from analysts, with speculation that bids higher than the initial $10 billion may be placed given the quality of GGP’s assets.

And though retail rents and occupancies will continue to deteriorate over the next two years, current prices may already reflect this. The window of opportunity will close faster than expected if greater competition results in higher prices that depress returns. Now may indeed be the time to seriously consider investing in retail properties.