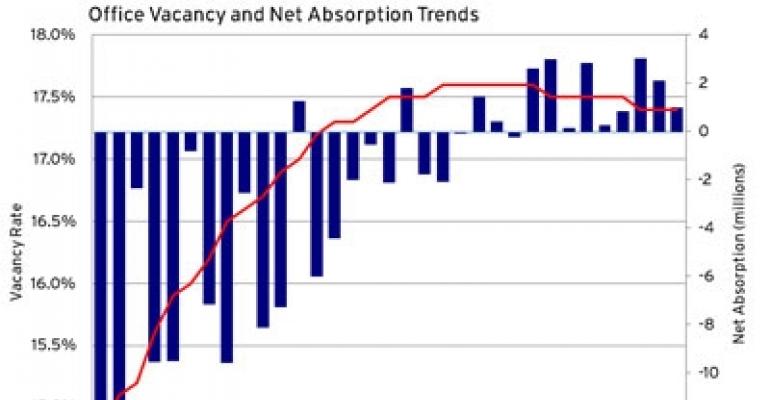 Has the Slowdown in the Office Sector Begun?

Uncertainty about the U.S. economy continues to run high. The unemployment rate remains stubbornly inflated at 9.1%, while market gyrations reflect unease over the limited ability of policymakers to avert a double-dip recession. With this, underlying trends reveal what may be cracks in the nascent recovery of the office sector.

Office markets posted a decent increase of 6.2 million sq. ft. of occupied space in the third quarter, indicating positive churn in leasing activity. In line with positive absorption of space, the national vacancy rate declined by 10 basis points, from 17.5% to 17.4%. Vacancies have descended from what appear to be a cyclical peak of 17.6% at the end of 2010, indicating the beginnings of a recovery. However, the recovery is modest and appears increasingly threatened.

First, employers have been very cautious about leasing new space and rising concern over the prospects of a second downturn may put further leasing plans on hold.

National absorption figures add up to 15.7 million sq. ft. for the first nine months of 2011. That is certainly a healthier number compared to the 17 million square feet of negative absorption for the comparable period in 2010.

However, consider that the U.S. economy has added nearly 1.1 million jobs this year through September. Office-using jobs may constitute about one-fourth of this overall number, so this translates to just under 60 square feet of new space leased per net job created. This reflects a very constrained pace of leasing, since office-using employees typically occupy between 100 sq. ft. and 200 sq. ft. of space.

It is too soon to tell whether recent market upheavals and heightened uncertainty have put a damper on the office sector’s fledgling recovery.

“September looks particularly weak, but there were three other months earlier in 2011 when absorption came in at less than a million square feet, only to post stronger numbers in subsequent periods,” notes Faruk Ozdemir, associate director for research at Reis. “The key difference this time around, unfortunately, is that expectations for economic recovery have shifted from somewhat robust to, at best, disappointingly slow. That may prompt firms to at least scale down leasing activity in the near term.”

The medium term prospects for the office sector also demand tempered expectations. Since consensus forecasts suggest that the economy will continue to muddle along until 2014 or 2015, office vacancies are likely to continue a slow downward trend.

Reis does not expect office vacancies to dip below 15% until 2015, from its current 17.4%. That is about half the pace of recovery, compared to the 450 basis point fall in vacancies during the last recovery period from 2003 to 2007. This modest outlook will also have to be revised if we do enter a second phase of economic contraction.

If the office sector enters another painful phase of negative absorption and weakening fundamentals, it is likely that we will look back upon the volatile days of August and September 2011 as the beginning of this cycle.