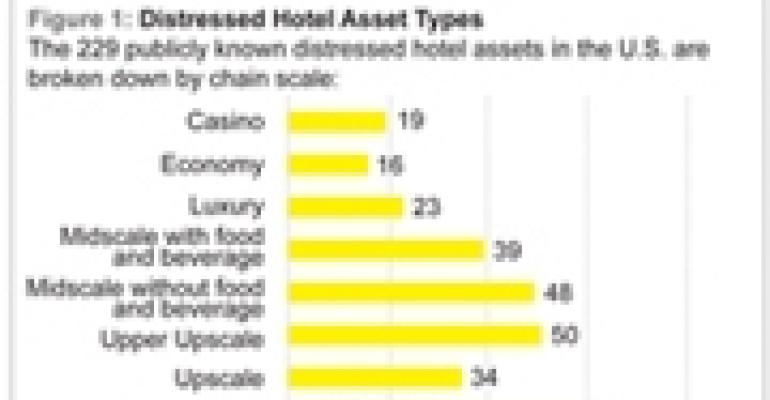 Although the biggest and most expensive distressed hotel assets have garnered the lion’s share of attention over the past 18 months, in reality it’s the upscale and midscale hotels without food and beverage that have been hit hardest, according to two new reports from Lodging Econometrics.

In April, the Portsmouth, N.H.-based hotel researcher first offered its listings of distressed hotel assets and halted construction projects to clients looking for investment opportunities. The reports include property facts and contact information for ownership groups and primary lenders of distressed assets in the U.S. The reports include construction projects that broke ground but later were halted. They paint a picture of widespread distress affecting the hotel sector.

“These are some of the early investment opportunities surfacing in the lodging business,” says Patrick Ford, president of Lodging Econometrics, which not only tracks development projects around the world, but also the portfolios of lodging investors.

“Many of these opportunities are in prime locations, have nationally recognized brand names and might not have experienced such difficulty if not for the financial crisis,” says Ford. “These projects could offer prime returns for investors throughout the next upswing.”

“In this last cycle, the upscale and mid-market without food and beverage went through the roof,” Ford explains. Brands like Choice’s Cambria Suites, Starwood’s Aloft and Element and IHG’s Hotel Indigo made their debut, while mainstays like Courtyard by Marriott, IHG’s Holiday Inn Express and Hilton’s Hampton Inn and Hilton Garden Inn grew like wildfire.

The number of halted construction projects has begun to decline as the pipeline has shrunk and the industry begins to improve with lenders loosening their credit strings. “It’s in everybody’s best interest to go back to those projects still viable and find a way to put them together,” says Ford.

Meanwhile, the list of distressed assets continues to grow, however, and Ford believes the trend will continue. “Early on, lenders were taking the position of kicking the can down the road. The idea was to extend everything and that is slowly coming to an end,” says Ford.

Hotel types that grew rapidly in recent years are now among the distressed assets. Select-service operations in particular, which feature minimal public space, much less real estate investment, lower construction costs and minimum food and beverage operations have burgeoned. “Those are the products that were off the charts in terms of development this past decade,” says Ford.

An independent hotel coming to market now may be priced attractively because it is unbranded. The asset could be a good investment if it is well located and of sufficient quality to be branded, notes Ford.

Geographically, the two reports offer few surprises. New York City and Las Vegas have the greatest number of halted construction projects, while California, Florida and Illinois have the most distressed assets by state. Chicago alone has 16 while Las Vegas has 14. Almost a third of the properties on both reports are located in the suburbs, further evidence of the surge in select-service development.

Is there a market or segment ripe with the most opportunity for investors? It depends on the type of investor, says Ford. Equity and opportunity funds will likely look at the bigger real estate projects — luxury and upper upscale — in central business districts and resort areas.

Hotel and management companies will lean toward select-service assets. REITs could find value in both segments. Smaller, local and regional companies, on the other hand, might be more interested in mid-market and economy properties in specific regions.