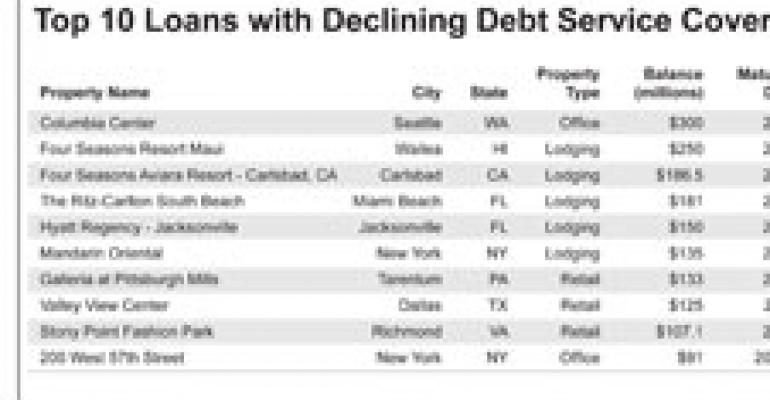 The Mandarin Oriental is a 248-room, non-flagged, full-service luxury hotel in Manhattan’s Columbus Circle. A component of the AOL Time Warner Center, the hotel boasts two ballrooms and a 17,000 sq. ft. spa, among other amenities. Despite its obvious qualities, the hotel has struggled recently due to the economy and local market conditions.

From October 2008 through October 2009, for example, revenue per available room (RevPAR) dropped by 20%. As income declines, the balance on the Mandarin’s mortgage is still a hefty $135 million. Falling revenue has also reduced the property’s debt service coverage ratio (DSCR) to 0.35x for the trailing 12-month period ending Sept. 30, 2009.

DSCR measures a property’s cash flow relative to debt obligations, and is calculated by dividing net operating income (NOI) by total annual loan payments. For instance, a property with annual NOI of $500,000 and annual loan payments of $370,000 would have a DSCR of 1.35x, or 35% income left over after paying on its loan.

“Any time this ratio goes below 1.0, it means that the property is not generating enough revenue to cover its debt service payments,” explains Paul Mancuso, a vice president with commercial real estate data and analytics firm Trepp LLC, based in New York.

Should these properties fall into special servicing, the special servicer would have two basic options: Work with the borrower to bring the loan current, or proceed to a note sale.

“If the special servicers did proceed with note sales in this environment, these properties could potentially be scenarios where investors experience a loss since the possibility exists that the current market value would be less than the existing loan balance,” says Mancuso.

In the case of the Mandarin, according to Trepp research, the hotel’s owner, Istithmar Building FZE Inc. in Dubai, will continue to fund all shortfalls in debt service coverage while they wait for the market to improve. The company anticipates occupancy to stabilize in 2010 with growth occurring sometime in 2011.

Not all borrowers in the below list of conduit loans rolled into commercial mortgage-backed securities (CMBS) share the luxury of deep pockets that have enabled the Mandarin’s owners to cover shortfalls. It is likely, according to Mancuso, that many will burn through their reserves if dour economic conditions persist.

Loans on the list share three attributes that, taken together, should signal investors to be wary of potential future losses:

1) The collateral property has experienced a decline in DSCR for three consecutive reporting periods from fiscal 2007 through most recent 2009. All of the listed properties had DSCRs greater than 1.0 in 2007 and 2008, but less than 1.0 in 2009.

2) Each property is still current on its mortgage payments.

3) Each property is on a servicer watch list, an early warning indicator of potential concern including default.