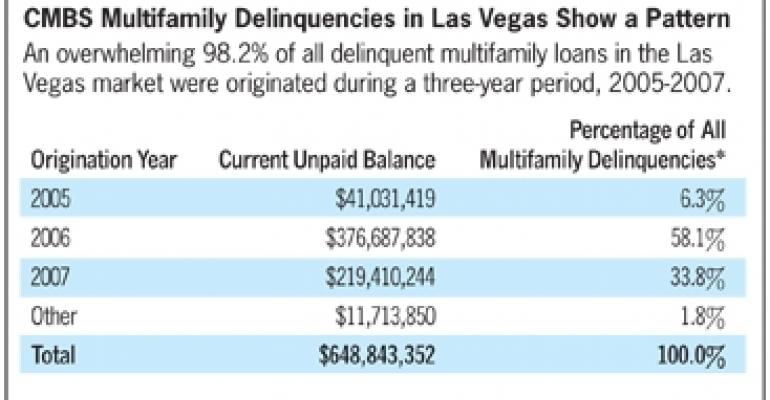 While the Las Vegas housing market continues to get pummeled by a wave of foreclosure activity — a trend compounded by a double-digit unemployment rate — the local apartment market is confronting its own crisis.

In fact, the Las Vegas apartment market recorded the highest delinquency rate among the top 10 metropolitan statistical areas based on the unpaid loan balances, reports Trepp. Phoenix was the next closest market at 16.4%.

“Las Vegas was the poster child for that overgrowth, for that lending boom from 2005 to 2007,” says Paul Mancuso, vice president with Trepp, citing lax underwriting standards during that period as the culprit for the high delinquency rates dominating the real estate landscape today.

Indeed, an overwhelming 98.2% of delinquent CMBS multifamily loans in the Las Vegas market were originated from 2005 through 2007, according to Trepp (see table). The current balance on those loans is $648.8 million.

“If you look at the top 10 delinquent loans in special servicing based on the loan balance, every single one was originated during that period when valuations were at their highest. In hindsight, those valuations couldn’t be maintained,” says Mancuso. In fact, eight of the 10 loans on that list are now in some stage of foreclosure.

Michael LaBar, vice president and director with the multifamily housing division of Marcus & Millichap Real Estate Investment Services based in Las Vegas, estimates that 65% of the apartment inventory locally traded hands between 2004 and 2007. That led to the frothiness in pricing and paved the way for what has turned out to be a hard landing.

Without substantial job growth in metro Las Vegas, many apartment owners face the prospect of high vacancies and little or no growth in net operating income. The unemployment rate in the Las Vegas area in July — the most recent data available — registered 14.8%, up two-tenths of a point from June, according to the Bureau of Labor Statistics. That’s well above the national jobless rate of 9.6%.

While the apartment vacancy rate in metro Las Vegas fell from 11.8% in the first quarter to 11.1% in the second quarter, it’s still much higher than the national average of 7.8%, according to Reis.

A debt-service coverage ratio of less than 1.0 indicates that there is not enough cash flow to pay the property's rental expenses and have enough left over to pay mortgage payments.

Mancuso sees cracks in the surface. Some 14.6% of securitized apartment loans in the Las Vegas market that are current had a debt-service coverage ratio of less than 1.0 in fiscal 2009. While these loans are still performing, the situation can be fragile.

In some instances some troubled borrowers are benefiting from reserve accounts established at the time the loans were originated to cover any payment shortfalls. “That can only last for so long,” says Mancuso. “These may be some of the next loans in the pipeline that become delinquent.”

Some 75% of multifamily loans current on their mortgage payments experienced a year-over-year decline in net operating income in 2009, according to Trepp, providing further evidence of a decline in property financials in the Las Vegas apartment market (see table).

Apartment rents locally have dropped anywhere from 12% to 18% over the last couple of years, says LaBar of Marcus & Millichap, and that’s before taking concessions into account. “What we’re finding is the occupancy rate is firming up, but [landlords] are still giving away the kitchen sink in concessions.”

For the past six months, LaBar said the conventional wisdom was that that rents were stabilizing, “but the fact is they’re still giving so many concessions away that there may be another hit in rents.”